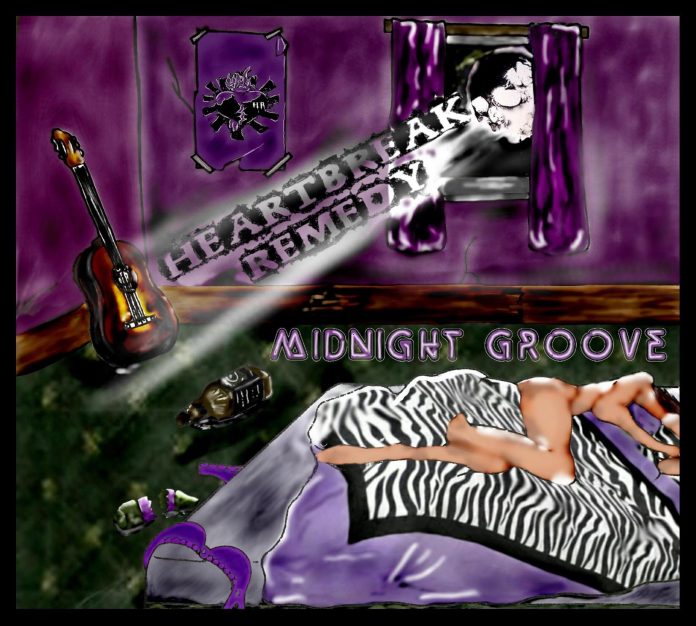 Cumbrian rock band is full of youthful exuberance on their debut

Think back for a second. Remember the first time your parents went on holiday and left you with the house to yourself. Remember how exciting it was to do the most mundane things? Got that feeling in your head. Good. Because then you’ll totally understand where this, the debut record from Heartbreak Remedy, comes from.

They only formed a couple of years ago, according to them “during a drunken night out” and to be honest the party doesn’t seem like its stopped. Since then the four piece have been busy getting in as many faces as they possibly can, trekking the country, supporting the likes of the Quireboys and The Last Vegas. During this time they’ve still found the time to stick out a couple of EP’s and record “Midnight Groove.”

No wonder it’s such a whirlwind.

There’s an absolutely wonderful naivety about the record. “Convoy” begins with a scream of “alright……!!!!” From singer Matt, as if to say he’s waited all his life to do what he’s doing now, and releasing this record. The music throbs behind him like some ACDC-meets-The Black Crowes mash up that claims at one point to be “bringing rock n roll to your door.”

The 12 other tracks here find much to mine in the idea of rock n roll being an escape from the humdrum. “Already Gone” with its groove has its coat on and it’s bags packed and is already down the motorway before you’ve read the goodbye note its left on your bedside table, likewise the superb “Cocked And Loaded” begins with the thought that “I’m a working class white trash son of a bitch” and becomes the first song since Guns n Roses’ “Dead Horse” to claim that “I’m the son of a gun and the gun of a son” in the process.

Even the sleazy tracks here are so very genuinely conceived. “Girl At The Bar” – a tale that every bloke growing up can relate to whether they admit it or not – swings its punches on the back of a riff that comes straight out of The Cult’s handbook and informs us with a total a lack of self-consciousness that the girl in question “ain’t got no money/she ain’t got no car/but she’s all dressed in leather and wearing no bra.” And even though you might be twenty years too old to return to those days, part of you wants to pat them on the back and wish them well as they try to go home with her.

Elsewhere there’s a very decent attempt at proper love songs with “Rose” and “Far Away” – the latter especially impressive, but its the rock n roll swagger that makes “Midnight Groove” so good.

Not an album that’s going to win any prizes for originality and you suspect that Heartbreak Remedy couldn’t care less. They wanted to make to make an album that was hard rock record to its very core about their lives to this point. On “Midnight Groove” they’ve done just that. As they put it themselves on the bluesy boogie of “Heartbreaker:” “I’ve got a band that’s just started, and they are hotter than hot.”

Good luck to them. They’ve just stuck out a very very promising first marker. Hopefully they’ll continue to enjoy their journey just as much as they clearly have here.