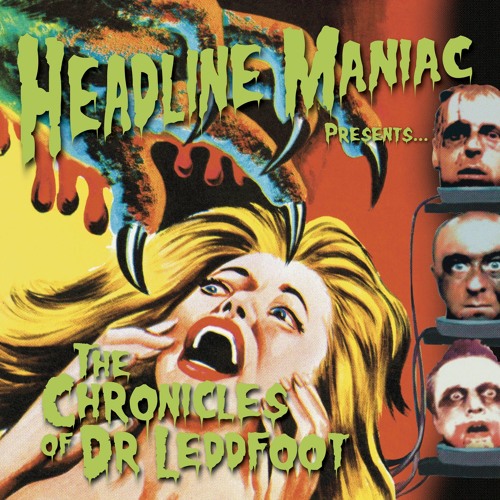 Come on. Admit it.

We’ve all dreamed it, right?

You sit at work and you’re bored shitless and you think to yourself (you can insert your own rock star here) “Christ, I wish I was Keith Richards, I’ll bet he’s not doing anything this dull”.

OK, then it passes, and in reality, if you are like me in real life – don’t smoke, don’t drink, only take so much as a Rennie when you have to and blush at the mere thought of a woman – you wouldn’t actually be very good at it anyway, but still.

That’s what “The Chronicles Of Dr. Leddfoot” is about. The fictional (it reckons) tale of a respected member of society, who embarks on a life of debauchery after a chance encounter with a shadowy figure.

That’s the theory, anyway. The practicality is that it is just a fabulous rock record.

I reviewed Headline Maniac’s debut a few years back and remarked that it “didn’t sound liked you’d think”. The reason for that was then and is now, that the three are all members of Eddie And The Hotrods and ok, there is a touch of punk about some of the stuff on “…Leddfoot” but mostly it is heavier and a lot more modern sounding.

Ian “Dipster” Dean sings here (as he did, actually when I saw Hot Rods the other week and Barrie Masters was unwell) and does a fine job. But from the start of “Save Me” with Chris Taylor’s metal tinged riff, it is clear that whilst the debut was obviously no fluke, then actually, the follow up has arguably seen them grow as a band.

“Bad Luck Inc” is drenched in organ like some latter day Deep Purple song.“Not The One You Want” is even better. It boasts an electro drum beat to start, before exploding into a hook, and whilst ostensibly it is a tale of a relationship gone bad, like a billion other tunes, blimey this one is good.

“I’ve Got A Thing For You (Walter Mitty Song)” (and lets be honest, the name here is important, given the plot of that book) is one of the best of the lot, with its dirty rock n roll piano lick, organ solo and thumping drums from Simon Bowley.

The bluesy harmonica to “Paradise” can’t disguise that it is filthy to its core. There’s even a bit here that, shall we say, has “echoes” of what happens in the middle of GnR’s “Rocket Queen”, but if that was in a LA studio, then this sounds like it’d be happy to get laid in an Aldi Car Park.

The first overt punk, really, is “Where Did I Go Wrong” – two and a half minutes of utter fury, but honestly, Headline Maniac get no better than the absolutely glorious, pure rock n roll masterclass of “Out Of My Head”.

You might not think this is the sort of record for balladry, but “Outer Space” sounds appropriately massive, and is juxtaposed nicely by the crunchy “Won’t Forget You” – and by the way, if all of these are about the same girl, she’s done a good job of ruining the formerly good Doctor. This has cowbell too, so is instantly cooler than your song without cowbell, them’s the rules.

“See Your Face Again” even gets bonus points for starting with a solo, and whatever “Looking For Love” is actually looking for, then I’m here to tell you that love ain’t that high on the list.

Ending with its most punk thing is probably deliberate. Racing for the exits, “High Society” is a Doc Marten boot to the bollocks, and whilst its hook offers: “you used to be the same as me, but now you’re high society” the way its delivered seems to be more than pleased to be in the gutter.

This trio were a side project, but that can’t be the case any longer. Eddie And The Hotrods are still on their final lap of honour, but three of their number are busy making headlines of their own.