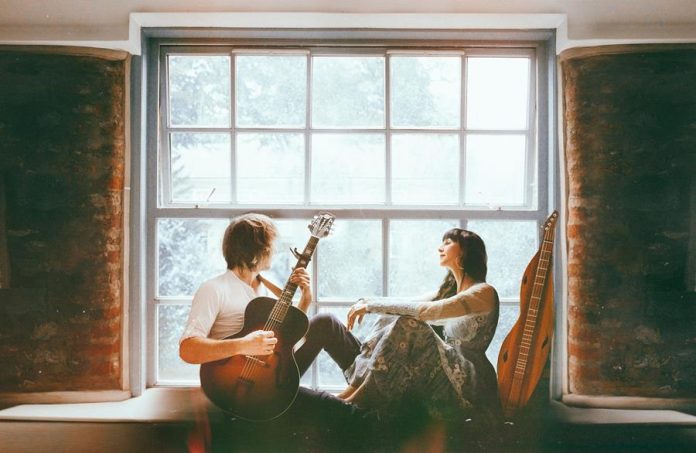 First heard on Billy Bragg’s reawakening of old Woody Guthrie tunes, “Way Over Yonder In The Minor Key” contains the line “….and there ain’t nobody who can sing like me” at its heart. Bragg still plays the song now, and there’s no doubt that both he – and Woody – mean it ironically. Here, though, on “Awake” it takes on a more literal meaning, because honestly, there really ain’t nobody that can sing like Hannah Sanders and her gorgeous voice dominates “Awake” in the most wonderful way imaginable.

“Awake” is Hannah Sanders and Ben Savage’s second record, coming two years after the debut – and like that first sojourn it is confident and classy. However, this time they show more of themselves as songwriters, which was perhaps only hinted at last time.

Indeed, “Awake” begins with a couple of self-penned ones. “Selkie Song” captures the vibe perfectly too, with Sanders’ vocals finding a home amongst some sparse instrumentation, while “I Met A Man” is a darker thing, Savage’s playing here is superb and the track finds the kind of hinterland that Thea Gilmore might occupy.

Whilst most of the songs feature Sanders taking lead vocals, “A Thousand New Moons” shows their flexibility with evocative harmonies and poetic lyrics. This one is followed up by “Every Night When The Sun Goes In” an instrumental, which if you close your eyes, could transport you to the desert with stars twinkling in the sky.

“7” is another of the originals, and is lifted and emboldened by the subtle horns, while the one that follows might be a traditional folk song (also covered on the Martin Simpson record last year) but “Reynardine” is a perfect fit here. Quintessentially British and weaving the natural world throughout, this pair make it their own.

Indeed, so talented are they, that they could have done anything with this album. “Santa Fe Trail” – a Savage lead vocal – is the sort of Americana that most would kill for, but the title track – featuring Jess Morgan and Oh Susannah on the harmonies, is another thing altogether, short and to the point, with an almost Billy Bragg like guitar and superb harmonies from the two.

Adept at weaving intricate patterns over sparse arrangements, never is this shown better than on “One Grain Of Sand” with Sanders’ vocals sounding particularly mournful, while “Reaching” goes for something a little more expansive with more instrumentation, building to something of a crescendo.

A fabulous folk record, “Awake” is what should happen when tremendous talent gets together. It doesn’t always, of course and collaborations can sometimes fall flat, but here it makes for something special.