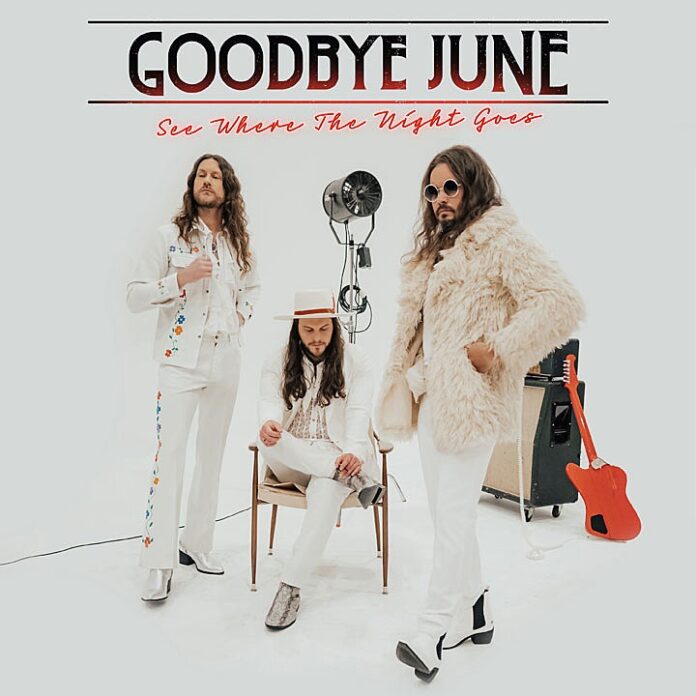 As I type this, right now, Goodbye June are sitting in the top 40 of the album charts, in the top ten of the vinyl equivalent, and right at the top of the rock section.

And, brother, look at the cover of “Where The Night Goes” above these words. You’d best be confident dressed like that. Suffice to say, I won’t be venturing down the street with that clobber on. The reason, is precisely because I am not possessed with a swagger.

The three piece, cousins Landon Milbourn (lead vocals), Brandon Qualkenbush (rhythm guitar, bass, backing vocals), and Tyler Baker (lead guitar) from Tennessee, mind you, they are the sort of people who have “rock star” on any application form where there occupation is required. “….Goes” utterly reeks of it.

Back in 2019 they released “Community Inn” – in my review I wrote “everyone seems welcome at “Community Inn” and this is one really warm sounding record, but it is also one of the more innovative takes on the southern sound that I have heard in a good while.”

That’s still – sort of – true, but these 11 songs are a lot more straight up party tunes than the occasional whimsical, floating that went on before.

Maybe it’s a reaction to the pandemic and the two years we’ve all had, but this takes up the Bryan Adams call to arms almost its been around the world, around the block, and everywhere it goes it wants to rock.

“Step Aside” might start in “a broken home on the bible belt”, but by the chorus, its worked out that “this time, is mine, step aside.”

It’s also worked out, basically that AC/DC rule. They always have and always will, so you might as well sound like them. That in itself is interesting, because there’s a part of you that thinks, do we need another one? Then you can’t stop nodding your head to the chorus.

The change in attitude is perhaps best shown by the line in the title cut, “I’ll go to the show, and powder my nose….” I am assuming here it’s a euphemism, and lets leave it there, shall we?

Most of them start slow and build to a crescendo. “Breathe And Attack” does it, so does “Take A Ride” and this chugs like something wearing denim and leather rather than white fur, but it’s a mindset, right? Oh and he wants to “give you a piece of his American Pie”. I am guessing he doesn’t mean the film.

“What I Need” sounds like the sort of piano ballad that Aerosmith would have done in 1975, and I am telling you, its only there so they can get a slow dance in, and however well done it is, you can’t help feel that “Stand And Deliver” suits them better.

There’s a healthy dose of tongue in cheek in this record, too. Not least “Baby, I’m Back”, a blues one, that begins thus: “Woke up this morning and the first thing I said, was “I don’t ever want to drink again” – by the hook, they are “swingin’ from the chandeliers”. Bless them. Even as a non-drinker I wish them well.

Ok, we’ve had a bit of fun with this, and rightly so, its not the sort of record (in the main) to take too seriously, but “Everlasting Love” underlines the quality of their songwriting and its not too much of a stretch to suggest that were Kings of Leon to have done this, it would have been gold disc time.

The one to take a little more seriously than the others, perhaps, is “Nothing” – the other ballad – and the line “Yeah, I’m so sick and tired. Always trying and ending up with nothing” seems to explain, maybe, why they want every damn thing.

“Three Chords” explains the lineage of their family, from their grandad in the gospel band, to where we are now, as  Milbourn points out “the message is different, but the chords are the same”, and as the arena shaking “Black” ends things, isn’t that the point? Isn’t that why we love rock n roll? Simply because it’ll never die, however much “they” try and kill it?

Which is proved by the chart positions, I guess. “Where The Night Goes” feels like one of those statement album number 3’s too. Like Slippery When Wet, like Born to Run, that you simply can’t ignore, so you might as well get on board, seeing as you’re going to get swept up in it at some point.

Previous article
BAND OF THE DAY: BLACK EYE
Next article
BATTLE ON