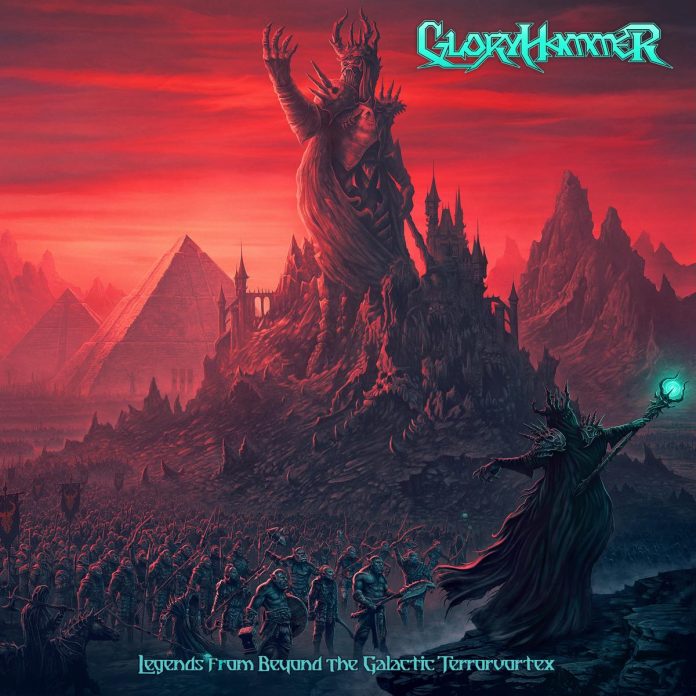 Then there was a furore about the fact there was a Starbucks cup visible on one of the episodes.

“Yeah”, I thought, “cos you’ve got the undead marching about and a woman giving birth to dragons, and the paper cup makes it unbelievable.”

“Legends From Beyond The Galactic Terrorvortex” is cut from the same cloth, to be fair. Gloryhammer are incredible. On every level this is…..fantastic. In every sense of the word.

This is the third chapter of the band that Christopher Bowes puts together when he’s bored of raising his Jolly Roger in Alestorm. This is where he truly lets himself go.

There’s a narrated bit on the third song “Masters Of The Galaxy” that is utterly stunning. A dismembered voice starts wittering on about “Slaughtering the peasants in Auchtermuchty” – like the bands previous two albums this one centres around a mythical battle for Fife, but honestly, that’s not particularly important. What is important is that anyone has thought this up at all.

But….and this is true of all Gloryhammer records (and I once spent my birthday watching one of their shows, on my own, which rather sums me up, I suppose) for all the knockabout shit, for all the fact that for all intents and purposes you this should be dismissed as Tomfoolery only, these are proper songs. Played by an ace metal band.

Try and resist the overblown tomfoolery of “The Siege Of Dunkeld (In Hoots We Trust)” as it parps and soars. You can’t. It’s not your fault. “Land Of The Unicorns” manages to be even more ludicrous that its title suggests. The lyrics to this are better than any fantasy novel there has ever been.

“Power Of The Laser Dragon Fire” is faster than Dragonforce, and sees Ser Proletius, Grand Master of the Deathknights of Crail (this I accept probably isn’t his real name) excels on guitar, and Angus McFife XIII, Crown Prince of Fife, does brilliantly to keep a straight face as he sings it.

“Legendary Enchanted Jetpack” (I swear to the god you think is holy that I am not making this up) concerns itself with an army flying through Dundee on their jetpacks, cos, you know. And the drums thunder (albeit they are probably not really played by Ralathor, the Mysterious Submarine Commander of Cowdenbeath).

Like Maiden, they do the eponymous song thing. Where most bands of this nature are just about getting the fists up in the air, this bunch, to be fair make theirs sound like an 1980s cop show – when you’ve got a “laser powered goblin smasher” it’s the only way in truth, right? “Hootsforce” is something or other about a Dark Lord in Dundee, but I was too busy enjoying it to care – and it sounds like it wants to win Eurovision.

“Battle for Eternity” asks the big questions: questions like “have you ever killed a Goblin on the moon?” and to be fair, I haven’t, so I am missing out, I suppose. And if you think that the rest has been barmy, then they’re only just getting started. “The Fires of Ancient Cosmic Destiny” tied up all the loose ends in 12 minutes of bonkersness that I can’t even begin to explain (and I think I made up the word “bonkersness” as if to prove it).

Put simply, however much you want to hate this, you really, really can’t.

Gloryhammer are the Power Metal band that other Power Metal bands dream of being. I went to see German trad metal legends Freedom’s Call a few years back. It was a Sunday night in a venue that is no longer there and the crowd was tiny. It included a young kid in his early 20s turned up in full Medieval garb and waved a wooden sword about for the whole show. This one is for you, mate.