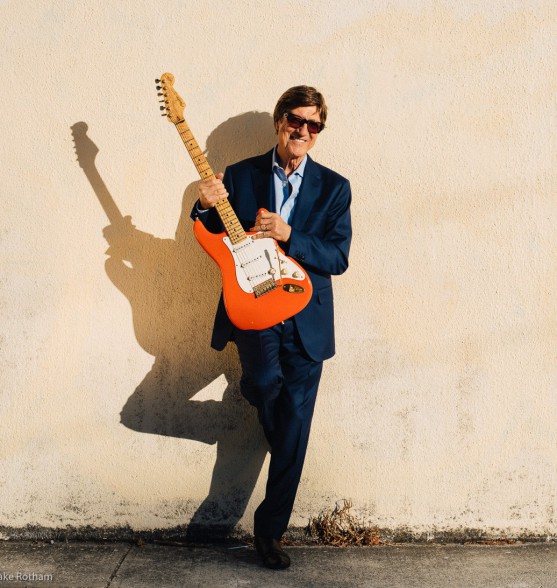 On June 28th guitar legend Hank Marvin will release a career spanning 3CD set as part of Crimson Records’ successful Gold series.
This 3-disc set focuses on Hank’s solo career, from his eponymous 1969 debut album through to his most recent Top-Ten hit Without A Word in 2017. Hank is joined on this collection by guest appearances from Cliff Richard, Brian May and Duane Eddy, and he duets with Mark Knopfler on re-recordings of two of the classic hits Hank made famous with his group The Shadows.
HANK MARVIN GOLD – CD

SIDE TWO
1. We Are The Champions (feat. Brian May)
2. The Good, The Bad And The Ugly
3. All Alone With Friends
4. Hotel California
5. Jessica
6. Guitar Man
7. Pipeline (feat. Duane Eddy

“When I was a kid, all I wanted was a red electric guitar. It had to be red because
of Hank and his magical sound.” The words of Mark Knopfler, recalling how as a
lad in Newcastle he dreamed of becoming a guitarist, just like his hero HANK MARVIN.

HANK too grew up in Newcastle-Upon-Tyne during the 1940s/50s. He first learned to play banjo and gigged with various skiffle groups in the area before he and his school pal, guitarist Bruce Welch, moved to London where they joined Cliff Richard’s backing band and became known as The Shadows.

Hank’s metallic echoed picking on a red Fender Stratocaster – with generous employment of tremolo arm – is often regarded as the sound that inspired numerous guitar heroes such as: Jeff Beck, Ritchie Blackmore, Jimmy Page, Pete Townshend, Eric Clapton, Brian May, Neil Young and, of course, Mark Knopfler, all of whom cite Hank as a major influence.

Cliff & The Shadows early chart-toppers – ‘Move It’, ‘Living Doll’ and ‘Travellin’ Light’ – kick-started a truly awesome string of 43 Top 20 hit singles in just ten years, whilst The Shadows alone scored five No.1 hits that included the legendary Apache which was to become the instrumental hit of the decade. It made Number One, became an instant classic and saw the start of a string of over thirty hits for the group who pioneered the now familiar band line up of two guitars, bass and drums.

HANK MARVIN may have been a Shadow for more than three decades but today he stands under his own spotlight having recorded a sustained series of solo albums.

More than 60 years on from when he started, Hank B. Marvin is assured his place in British music history.

Note for editors: Gold is Demon’s ‘best of range’ and the format is 3CD compilations presenting definitive artist at a great price. Working closely with the artists on each release, selective titles are also pressed on 180g heavyweight gold vinyl

Previous article
REVIEW: GLORYHAMMER – Legends from Beyond the Galactic Terrorvortex (2019)
Next article
STICK AT IT