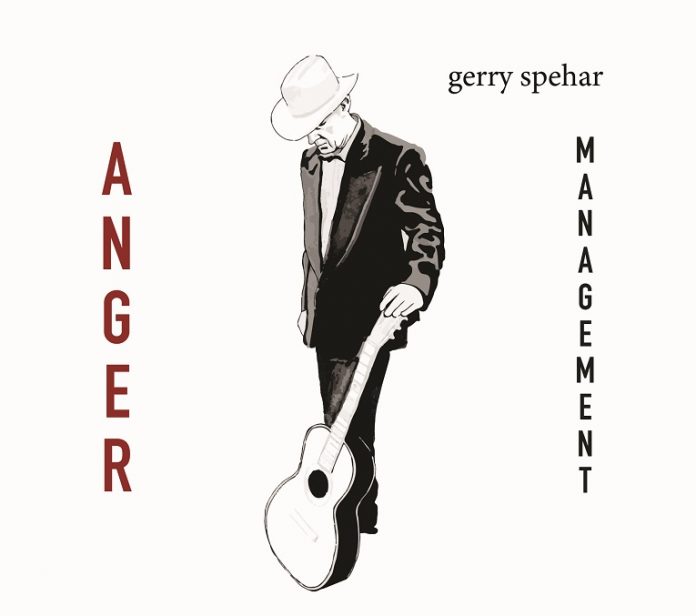 In the spring of last year I reviewed the debut album by Gerry Spehar. An interesting back story, it was a debut more than 30 years in the making. For “Anger Management” to emerge so soon after might, on the face of it, seem like he’s making up for lost time (and indeed maybe he is) but rather more it appears this was an album Spehar simply had to make.

The first track, “Thank You Donald” probably explains it better than anything. “that seat went red, and the whole damn country bled” he sings. And pretty much everything here needs to be seen through the prism of that moment back in 2016 when America lost its collective mind (and I am speaking here as an Englishman who believes we have one of the most evil Prime Minister’s in our history currently in Number 10 Downing St, just to be clear).

“…Management” is – rather like the wonderful Keegan McInroe record I reviewed back in January – a good old-fashioned protest song, and much of it deals with the clown in the White House, but like the debut record “I Hold Gravity” it does it with such skill that even if you are one of those people who “doesn’t do” politics, then you might still find much to treasure.

And like last year’s collection, it winds its way around as many musical styles as you can imagine. From the bluegrass of “…Donald”, to the bluesy “Son Of An Immigrant” to the slide guitar drenched title track (“don’t tell me I’m angry, that makes me mad” is a brilliant line, as is his thought later on, “turn off the TV, we ain’t slaves you and me”) is only a journey of around 10 minutes, but it does exemplify how varied Spehar’s songs are, as well as how talented this band he’s assembled is.

“A Soldiers Spiritual” is dustbowl folk of the highest order, and even if the theme is tried and tested, it is still worthy of Woody Guthrie himself. Indeed, it is interesting too, just how many fresh ways that Spehar finds of looking at subjects that are familiar. On “Pearl Harbour” he echoes the spirit of Mark Knopfler’s later work to discuss what we learn from history, while “Carnival” has a touch of vaudeville about to produce something genuinely unsettling.

“Bitch Haven” is the tale of a real-life meeting between Woody Guthrie and Trump’s dad, and the classic blues strum relates to the present day to create something special, and there is nothing in music, perhaps as evocative as Lap Steel and “Except For The Bomb” reinforces that. There is, though, a hint of Drive By Truckers in the guitar work to go with it, while the Latin touches of “Barrier Reef” tell a tale that wouldn’t have gone amiss on Springsteen’s “Devils And Dust”.

It is the last three, however, that underline how superb Gerry Spehar is. “Greed” is full of jazzy intent, the soul infused “Freedom To Grab” is covered in horn and dripping in irony as it deals with the sexual abuse scandals that have engulfed the likes of Cosby and Weinstein – and it is actually funny too in a way that few songs are.

The last one, is perhaps the best and most powerful. “What Would Jesus Do?” is just about as vicious a condemnation of American capitalism as you will find: “Jesus preached the filthy rich shall inherit the whole earth, said they deserved to own it all by accident of birth”. A stripped down, acoustic song, comparisons with Dylan are surely not far away.

Whether you agree with his politics or not – and I assume you will understand that he has a like-minded soul in this reviewer? – Gerry Spehar is a fine singer/songwriter. Able to be thought-provoking, highly skilled, but never self-indulgent, “Anger Management” proves one thing: the debut album was no fluke. Anyone, probably, could write one album in thirty years and make it great. Only the truly gifted can follow it up like this.

Previous article
BAND OF THE DAY: WEATHERED STATUES
Next article
VOLBEAT – FOR FREE!