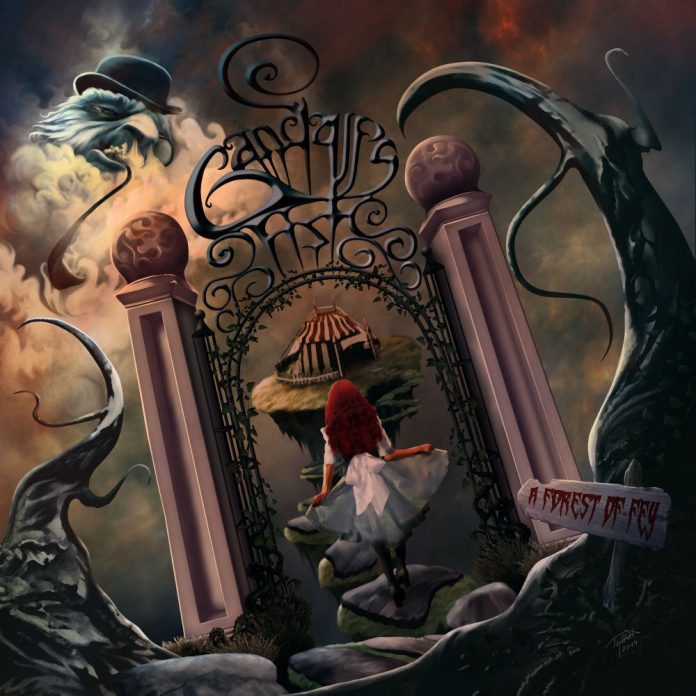 A gap in in a hedge, innocent at first, leads down a lane few dare to tread.
Where a land filled with wonder awaits for all those who dare pass unseen.
The creatures that dwell here are fabulous yet familiar…
An Old English Gent; A prim and proper lady; the urchin boy full of fun and mischief
A travelling bunch of misfits who fill the world with sinister fun.
Ensnared for a time without end, a child stumbles into this world that is neither normal nor sane.
Guard yourself from the lands outside, for the world we create is not cruel, nor kind
Welcome one and all to the other side… please watch your head.

The above is a spoken word piece towards the start of this magnificent, sprawling work, called “The Figure Speaks.”

But then what did you expect? It’s the name that gives it away. Gandalf’s Fist. You just read it and know

The thing is with Gandalf’s Fist, it’s about more than that. They have pedigree, their 2013 release “A Day In The Life of A Universal Wanderer,” was a favourite of legendary rock scribe Geoff Barton, now the fertile minds of founding members Dean Marsh and Luke Severn are back, with a record that is simply astonishing in scope.

The story goes that Dean was walking in a forest on a blustery day near his Cumbrian home. When he returned, where most of us would put the kettle on and see what we had to watch on on our Sky plus box, he had this album scoped out in his head. It’s enough to make you sick. Or at least it would be if it wasn’t so good.

“Forest Of Fey” tells the story of a young girl who gets lost in the forest, meeting some strange, enchanted characters on the way. Possibly. You see the absolute beauty of this record is that it might not be about that all – it’s one of those rare things that can mean whatever the listener thinks it means.

For certain however, it kicks off with “Childhood Ghosts,” which instantly sucks you into its sphere, before”Gardens Of The Lost” entangles you in its web magnificently. This is one of several tracks to feature the female vocals of Melissa Hollick, who does a fine job. It also features, on whistles, the considerable talent of Nightwish multi-instrumentalist Troy Donockley, one of many special guests including Matt Stevens, It Bites’ John Mitchell and Clive Nolan of Pendragon, who all bring their own touches and flourishes to proceedings.

This is GF’s first album as a four piece and a return to their more folky sound. Occasionally they can still cut loose, and the title track features a stunning guitar solo alongside its huge chorus. “The World We Created” is perhaps best of all, undulating and meandering it’s way to something genuinely thrilling and all in five minutes, “nothing is what seems, especially here and now,” it says. A neat metaphor for this record if ever there was one.

“Drifter On The Edge Of Time” brings with epic intentions, “Forest Rose (Coming Home)” is full-on folk, “Return To The Tournament” is almost medieval in feel, while the end of the album sees “Stories Old And Stories Told (Of Children Brave And Children Bold)” weave its lilting acoustics, telling it’s tale of childhood dreams along the way, before the almost foreboding “The Poison Tree” finishes things off in rather darker tones than much of the rest of the material here.

This is an album that keeps on revealing more to the listener with every spin. It’s a body of work that is only limited by its own – and your – imagination. Investigate this enchanted world, it’s one of the best records you will hear all year.