Destroyed Beyond Belief, Our World Below?, Slaughter Horse @Birmingham Academy 3 19/10/14 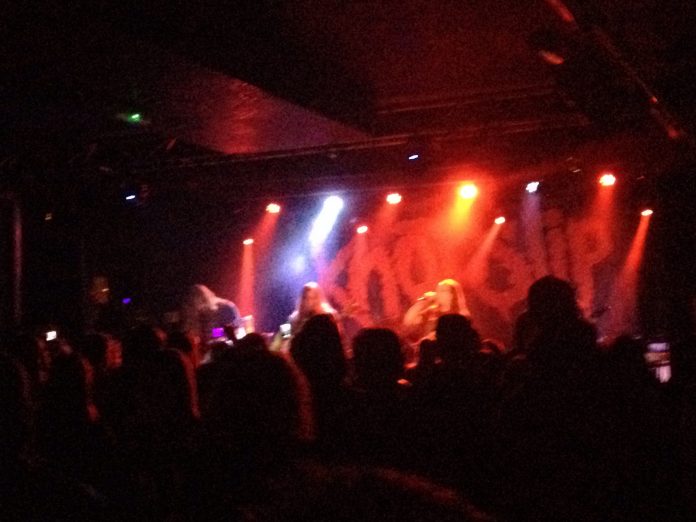 Three local bands set about destroying the world in Birmingham. And that’s no horseplay

The stellar cast of local metal that is forming the support to Knotslip tonight (and perhaps the imminent return of the real Corey and the maggots) ensures a large crowd has already assembled by the time Slaughter Horse take to the stage. The five piece use the clean vocals vs growl approach to superb effect and “Return To Our Shores” brings with it a type of Cancer Bats or Every Time I Die feel. The other tracks bring a slightly more metal edge, and their delivery is exceptionally tight. “Are you ready to get Slaughtered?” Asks singer Jim Chilton, many more songs like closing number “Archetype Decimate” and people will be queuing up.

Our World Below? are another five piece and another band to view genres as things that restrict other groups. They hop round across all things metal – often in the same song – and as you would expect from members of much missed acts like Adrenaline and Left Unscarred it is expertly played. Pleasingly they largely refuse to be bound by song titles either so “One” is followed by “Five,” the latter of which sounds like early Lamb Of God in places, before a surprisingly melodic solo from guitarist Jack juxtaposes things nicely. “Silent Chair Dance” is better still, with it’s fearsome riff. Our World Below? end up very much on top.

To call Destroyed Beyond Belief hotly tipped in these parts is the understatement of 2014. In certain circles, people in the area that invented heavy metal are getting very excited indeed. The six piece from Wolverhampton have just released their album “Destroyer” which promises “an hours worth of extreme metal and anthemic choruses wrapped up into 13 tracks.” You’d think they might be a bit nervous at living up to that. You’d be wrong. “This first song is about Stevie Wonder in church” explains Sean on vocals. “It’s called Blind Faith.” And with that his band are off and slamming. “Broken Pride” follows and it’s immediately clear why Sean was so relaxed, it’s because he – and let’s be honest everyone else in here – knows they have a collection of brilliant songs in their back pocket. “Driven Insanity” builds slowly and sees the clever use of samples to the fore, before cutting loose with a bass-fuelled groove that echoes Pantera and features possibly the best synchronised headbanging of 2014. Destroyed Beyond Belief make good on their claims and then some, the title track of the album is almost murderous in it’s intent and all but takes an sonic wrecking ball to the venue. And speaking of understatements, DBB close with “Revelations.” “It’s very, very….good” says Sean. He would make a crap used car salesman. He fronts a fantastic band.

A trio this strong and not even headlining? More proof if it were needed that the metal scene in the Midlands is undergoing a boom time right now. This collection are from it’s more extreme edge, but all of them have the potential to be very special indeed. Follow that Knotslip.