Tampa’s finest bring some much needed Pantera-sized riffage and grim death metal madness to the sunshine state on new release. 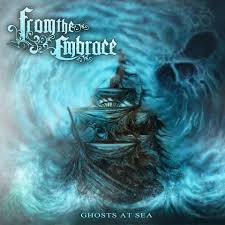 Formed in Tampa, Florida in 2007 the five-piece that is From The Embrace deal in the musical currency of brutal death metal with melody and technical ability writing the cheques.  From their debut EP in 2009 titled “Heaven’s On Fire”, no not a Kiss cover, to their debut album “The Sun Betrays Us To The Night” in 2014 they have kept the now storied Florida death metal scene fresh with new energy, vitality and ability.

Once the two minute intro, entitled simply “Intro”, is out of the way, as intros go it’s pretty decent, the volume is turned up and the mayhem can begin in earnest. “Karma Calling” is the first track proper and it’s a rip-snorting, gut-cleansing powerhouse of headbanging, foot-stomping intensity rivalled by very few modern day bands.

The title-track “Ghosts At Sea” is perhaps the best thing on the EP. The rhythms are punishing but full of brutal melody and snarling guitars are pushed along by the hammering drums and twisting bass lines. Tracks like “Vivisection” and “Kingdom Of Conscience” merely re-inforce your initial thoughts.

Vocalist Nick Marrero powers through the tracks with a recklessly controlled performance which veers from Black Metal screams to Anselmo-like vitriol without missing a beat.

By sharing the stage with some of the genre’s finest such as Deicide, Nile, Winds of Plague etc they have picked up more than enough tricks and after listening to this there is no doubt that they deserve to share some of those bands high profile.

“An Early Grave” closes things out in an anthemically destructive manner. There is a touch of metalcore about it with the odd clean vocal pattern emerging but over all it’s just sheer intensity and power backed by technical skills that the vast majority of bands would love to have in their collective lockers.

This is a band on the rise and you would be well advised to jump on board before they steamroll all you over.