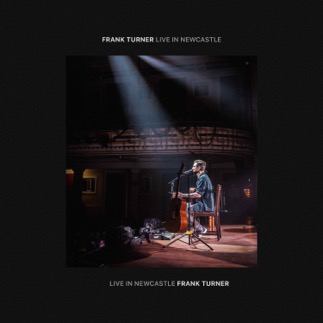 I had a whole different intro planned to this, but then it hit me.

In November 2019 when Frank Turner And The Sleeping Souls played this show in the City Hall in Newcastle, they obviously didn’t know that it would be released in the midst of a global crisis, but unwittingly, they have created the perfect album for lockdown.

There are many reasons for this – one of which we’ll get to at the very end (that bit was the plan) – but primarily is that it works as a whole so, so well.

The structure of the show is so well thought out, and the stories, the way they (and as ever with Turner, The Sleeping Souls suffix is all-important as this is a band) deliver this songs in a slightly different format,  means it works better is a collective. All we have these days is time, so invest an hour and 42 minutes with this rather than dipping in and out.

Join him on his journey, from “The Ballad Of Me And My Friends” (“the musicians who lack the friends to form a band, well, they’re called Singer/Songwriters”) to “the present day” as he puts it, of “Be More Kind”, because that’s how it works. After the “starting out” songs, if you like, and I still can’t resist the line “I don’t remember details but there were English boys with Banjos”  in “I Knew Prufrock Before He Was Famous”, there are the “unhappy love” songs.

“Substitute”, “Isabel” (“why did 2009 me title the song with her damn name!”) are fabulously done, and are part of the reason why, although I’ve never met him, you feel like you know Turner. “Reasons Not To Be An Idiot”, lays bare his struggles with mental health and addiction and delivered in a kind of country and western way, as it is here, it proves that a great song can be done any way you like.

With Turner, listening to his albums, particular “Tape Deck Heart” from 2013, it felt like we were part of his struggle, and hearing “Tell Tale Signs” in this format and listening to his stories, and understand that “Amy” is used rather like Springsteen, say uses “Mary” as an all-encompassing character informs them here.

That leads us into the next section, where he’s trying to come back, and “Love 40 Down” a track from his 2017 “Songbook” compilation becomes integral here. This leads into his marriage, which is told through the lovely ballad “There She Is” and the new outlook that was 2018’s “Be More Kind”. “Don’t Worry” and the closing title track from that bookend a warm ending to the evening.

In between they do “Photosynthesis”, of course, and “Recovery” and you can see a gifted artist  growing before you, and crucially growing with his audience. Turner has a bond with his fans, that they are going through similar things, living similar experiences. He just articulates them better than they ever could.

This is show 2429 of his career. I’ve seen a number of the others. I saw his first band Million Dead too, but the first time I saw him, if you will, was opening acoustic and solo for Gaslight Anthem in February 2009 in Birmingham. That gig has a special significance for me.  It was the first gig I’d been to after my mother had died a fortnight or so before.  That night, and I can’t put it better than this,  I felt…happier and less alone….and on “I Still Believe” here, when he sings, “who’d have thought, that something as simple as rock n roll could save us all….?” He knows. It saved him, too. He says so in the set. He probably saved someone, somehow, each show he’s played.

To paraphrase, it might have been a long road to recovery, but music is all a lot of people have to help.

And after all that there’s only one feeling left. Look I know this is trivial to most people, I do, but those who know, will know.  Christ, I miss gigs. Especially when they are as good as this.