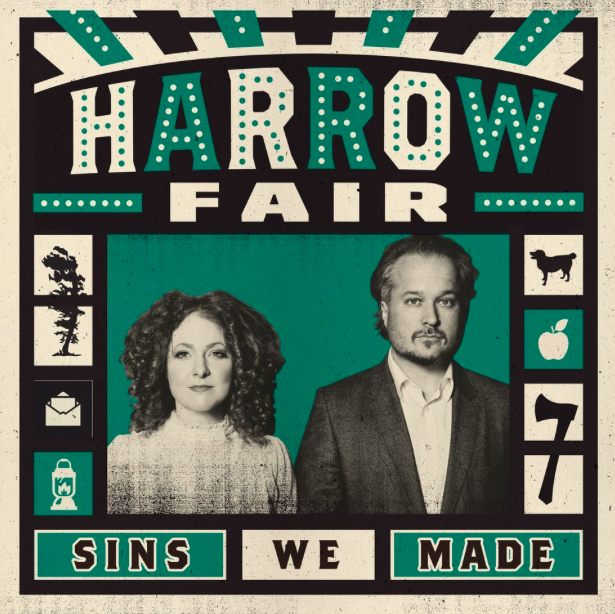 It seems like yesterday but was – give or take a week or two – three years ago, that I reviewed “Call To Arms” a collaboration between Miranda Mulholland (Great Lake Swimmers, Belle Starr) and Andrew Penner (Sunparlour Players). It was a superb collection. Crucially, though, it was one I concluded that “defy genres and logic”.

Now they are back, and “Sins We’ve Made” not only builds on what happened on the debut, but ramps everything up and doesn’t so much as blur the lines, but frankly not even understand there are boundaries in the first place.

Right from the off, the title track as it happens, it’s clear that this is a pair with a nose for trouble. There is some primal, lustful urges in the fiddle playing, something that suggests a walk down the wrong side of the tracks, and when they join together for the harmony part, then this is not so much a call to arms this time, but a blatant summoning.

Everything about this stomps up a storm. The overt folk of “Rules Of Engagement” is probably the best thing here. Like many on the record, it’s a vocal duet, but is better when they both sing at the same time – plus there’s something glorious about the pay off line: “you say that nothing’s too good for you, but she is….”.

Yet there are so many different colours and shades. A real beauty in the pure love song of “Dark Gets Close”, manages to somehow invoke the rugged beauty that I always imagine Canada to possess.

That is balanced out by the darker, more foreboding tones of the traditional sounding “Seat At The Table”. And a word too for the instrumentation that so compliments the vocals, it is absolutely perfect, not just here, but on the others too.

The way “Loved You Enough” is picked out, at once fragile but totally sure of itself, is a thing of real skill, and Mullholland (who was nominated for an award last year for her solo album) has a gorgeous voice, but it doesn’t ever sound better than it does here.

“…Made” could have, well, been made at any time, given that it doesn’t have much truck with “contemporary” anything, but “I Saw It In The Mail” is so traditional you can picture it as the soundtrack to a saloon in Dodge City. There is just a rawness here.

“Shiloh” is full of a real Celtic sound, and honestly, its instrumental tones are not far from a ceilidh,  and there’s something innocent about “I Just Wanna”. It conjures up images of drive-thru cinema and chaperones at the school dance.

“Shadow” has a more epic, rounded feel than most of the album, and “Rich Looks Cheap To Me” takes things in a more acoustic direction, but it is a very clever track. Two sides to every story, it suggests, but to take that a stage further, then also two halves of the same coin.

And that fusion is all over “Sins We Made”. There was only seven deadly when they started, but Harrow Fair have invented a few more, surely. A thoroughly interesting, compelling and supremely well put together album, it improves on the first one – and that makes it very, very good indeed.