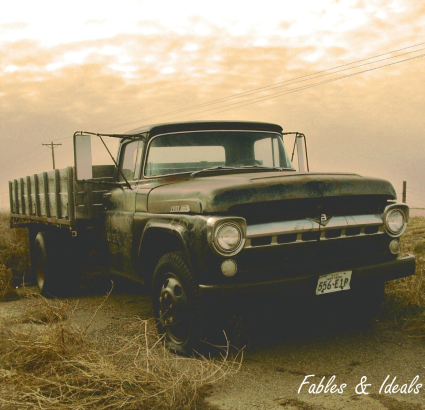 Back in 2009 Brit Garry Hutchinson found himself in Arizona. Inspired by its rugged beauty he began to write a collection of songs. Tellingly these weren’t finished until he was back in the UK, in the Lake District to be precise, where Britain’s very own rugged natural beauty was used to conclude the project.

And that becomes clear as “Fables And Ideals” (and by that we mean both the band and the album) unfolds and meanders it’s way through its gorgeous eight tracks. They obviously couldn’t have been made with America, but there’s a very British feel too.

FaI (the band) saw Garry’s wife Enise add her wonderful tones to backing vocals and occasionally more than that, and her presence allows the record to take many a stop off in many a place. From the stark opening of “Beaten Spirits And Paper Crowns” give way to its lush end and from the lush acoustics of “Memoirs” it’s impossible not to think of the much missed Chris Whiteley and his marvellous song “Big Sky Country”, because this is a lovingly conceived and warm album throughout.

It’s not content to rest on its laurels either. “Anthem” takes things straight into Tom Petty territory – right down to the clever and sparing use of Harmonica – and “sparing” is a good word to use when describing “Fables And Ideals” (the album). It could, if it so desired, take itself off into real moments of bombast, that it never does works brilliantly, because the minimal approach adopted by songs such as “Broken Lullabye” allows it to really seem natural – as natural in fact, as the landscape that brought it in to being.

“Wayward Promise” isn’t too far from something that Pearl Jam might attempt at the most Neil Young-like, while “Between Light And Decay” wouldn’t be out of place on Springsteen’s glorious “Nebraska” record.

The collection chooses to end with the almost campfire singalong of “Footprint” entirely deliberately you’d guess. This is a record with the outdoors at its heart, and a real troubadour spirit at its core. It’s DNA is evident on the high point of the whole record. It’s second track “Passage Of Time” sees the duo mesh to incredible effect (Enise taking a prominent role) and a confident yet understated lead guitar line elevating the whole thing into something very special.

“Fables And Ideals” might be an unexpected gem perhaps, but it’s a gem all the same.

Fables And Ideals is released on December 4th.