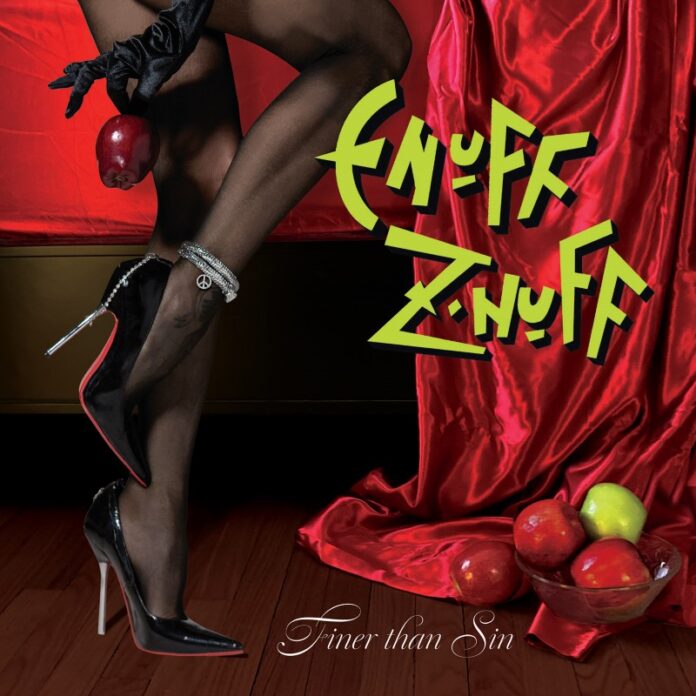 Back in 1989, I was in the middle of a serious Enuff Z Nuff phase, and I had their posters on the wall – they were rock stars. MTV staples with massive singles. Last month, I saw the band (well the 2022 vintage) play with Skid Row, and there, at the end of the show, was Chip Z’Nuff merrily selling merch and meeting fans.

That speaks to a couple of things, I guess. Firstly, the longevity of the band – “Finer Than Sin” is their 17th record (I think), but also that as long as Chip is there then whatever else goes on, they’ve still got their beating heart. He does this, it seems, because he loves it. He’s proud of the band, and their legacy, and grateful that he can share it with people thousands of miles away.

“Finer Than Sin” – 10 songs, bookended with a couple of instrumentals and a cover – could only be EZN too, there’s not another band who sounds quite like they do on “Soundcheck” and “Catastrophe”. The intro rockets along like a sleazy glam rocker, but the latter? No one has done this pop rock better. And the chorus: “the crack and the cocaine and the LSD” does that thing that you can get away with if your tunes are happy: you can sing anything and it sounds as warm as a summers day.

It really does feel that Chip is settling scores here. I am not going to speculate as to who “Steal The Light” is about, but whoever it is, needs to be concerned. Rougher, spikier and way more acerbic than usual: “your silly puffy face, I just can’t erase” offers Z’Nuff, and it’s a side to him you don’t always see.

The guitar from Tory Stoffregen and Tony Fennell is wonderful throughout. If we were giving MVP awards out here, they could have one each and this is very much a rock album. To prove it, “Lost And Out Of Control” is well named as they’ve let the handbrake off.

This is the second EZN record in a year. The first was a Beatles covers record. That wasn’t a huge departure, either and that the whiff of the original boy band is never far away. “Intoxicated” makes it clearer, and that’s fine. It’s not like anyone here will be upset at the comparison.

Right at the heart of the album is its centrepiece. It’s statement. “Hurricane” has all if its influences sewn on the patches of its jacket, but there’s a real depth too, the closest Enuff Z’Nuff have ever got to prog? Maybe. Whatever, the philosophical point of “it’s sunny before the earthquake” does chime, for sure.

That they follow this up with “Trampoline” – a proper old school EZN cut if there was one – is probably deliberate. It rhymes “trampoline” with “obscene” without a care in the world and, as one of those from the “old school”, it would be cool if they added the brilliant “Temporarily Disconnected” to the live set. Indeed, when Chip sings “not trying to be anything that I’m not” it almost seems to sum up his whole career.

The cover of “God Save The Queen” is better than you might have imagined. Chip spitting Lydon’s lines in his best Dick Van Dyke is perfect, and this band is basically an honorary English one anyway at this point.

“Finer Than Sin” is impressive for many reasons but the word you keep coming to is “energy”. Simply bands of the same vintage don’t have the drive that Enuff Z’ Nuff have. Indeed, while some of their obvious peers are heading out on arena tours and milking the cash cow one more time, despite not having released anything in decades of any note, Enuff Z’ Nuff are on their fifth album in six years. If Chip is envious he doesn’t sound it, in fact he sounds like he’s living the dream, still.