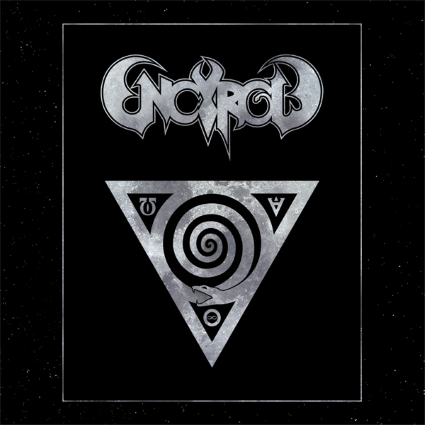 Remember a few years ago, when you couldn’t pick up a rock magazine without reading that there was another New Wave Of Heavy Metal? Bands like White Wizard, Enforcer and Cauldron were going to put their studded belts on, write a riff that was somewhere between Maiden and Mercyful Fate and the world would fall into line.

Those three were all extremely good at what they did in fairness, but this world domination stuff, well it’s a fickle beast, isn’t it? Those bands plough on, the kids though, they never quite followed.

The problem is, in this internet age. You can go on Spotify and listen to Iron Maiden whenever you please, it’s not as difficult to mine the of the past as it once was. In short, why bother listening to a band that sounds like your favourites when your favourites still exist?

But, true metal, you see, doesn’t die. It just fades away for a bit. And in the case of Denmark’s Encyrcle, it comes racing out of the blocks claiming its “Nocturnal Speed Metal” and releases its debut album.

You can basically ignore the epithet. Essentially you will like Encyrcle, if you like the music on Iron Maiden’s first two records, but you wish that instead of being sung by Paul D’ianno they were fronted by King Diamond after he’d been listening to Judas Priest for weeks on end just to get Rob Halford in his mind.

Beginning with a short intro as these things do, it’s soon time for “To The End” to gallop with its twin guitar melodies all over the place, “Evoke The Night” to do the same and likewise for “Bloodbasker” to punch you in the face with a knuckleduster on.

To call this a one trick pony rather does it a disservice as its magic is pretty clear. “Dizzy Me Deadly” passes by in a blur of furious rage as N Hydra stretches his range to the absolute limit, and if the instrumental “Serpents Dream” adds some layers to things then it’s only so “Deathlust” can up the menace levels, and if you need to be told what “Facelasher” sounds like…..

The epic “Black Dust” is a fantastic piece of work, and “Obliteration Eyes” starts with a drum solo, and has a level of innocence about it that you can only admire.

The last two songs sum up the album perfectly. There is precisely nothing original here, but then there’s precisely nothing wrong with it either. Encyrcle are rather good at flying the trad metal flag, and that’s all they want to do.