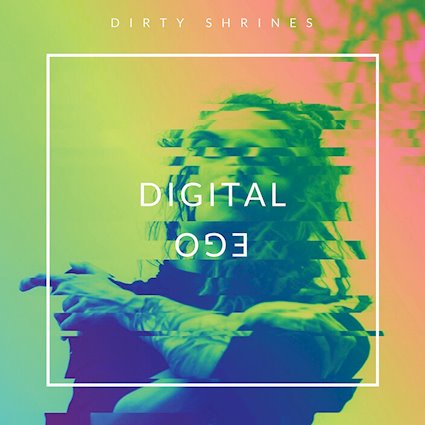 Dirty Shrines is a rock band from Fort Collins, Colorado founded in 2018 by long-time friends and musical collaborators Tim Browne (vocals and guitar), Brian Van Proyen (guitar and vocals), Drew Johnson (bass and vocals) and Max Barcelow (drums, percussion and vocals). They have their debut album `Digital Ego` released this month which was influenced by watching the way that people just lose their minds on the internet, the band included. The way we are incensed, motivated, addicted, compelled, and manipulated by the internet gets sadder and more dystopian by the day, relate the band, so that’s what we wrote about.

The album opens with `Vainglorious Bastards` which starts with what sounds like a scratched vinyl record playing through some dodgy speakers before bursting into life with some grinding guitar riffs with a drumbeat heart and vocals (harmonised at times) shared in a kind of languorous manner which really suits this track. We have a much more forceful catchy melodic mid paced rock out with fuzzy guitars on `Iron Blinders`. The sort of number that every kid who picks up a guitar would want to copy and play.

`Every Mile` is a rockier number and felt to me a mixture of Foo Fighters meet Thin Lizzy where they come up with a piece that`ll please both sets of fans. We have a dreamier more anthemic offering with `The Only You You Know` which had me sort of zoning out and drifting along with the music.

`The Devil You Know` is a slower burn but still has a powerful texture to it and enjoys a cracking guitar solo in the latter section. We have a skewed post punk indie sound to `Happy Hour` which stop starts at times but has a daydreamy feel to it.

`Loud Cliches` is unashamedly influenced by the wonderful Thin Lizzy and especially `Dancing In The Moonlight` and having had the pleasure to see the band decuple times, Scott Gorham would have lapped these guitar chords up. I felt there was a harder edge to `Aren`t You Ashamed` where the vocals had that slight belligerent texture, almost challenging the listener.

It seems to grow in intensity as it progresses.

`Breakfast` had a more illusive vibe but did gain some robust guitar chords and riffs as we shared it`s journey. We close out with `The Lovers In Dystopia` which seems to have it all, melodic textures along with rock out riffs and pounding drums. It also kind of drifts off somewhere else in the concluding part and leaves us with a low droning hum or interference buzz of sorts.

`Digital Ego` is an interesting release and an album that will not be easily categorised in genre. It has it`s quite introspective melodic moments, its post punk / new wave passages and it`s unadulterated rock out moments. Dirty Shrines have produced an album that i`m sure you`ll discover something new each time you return to it.