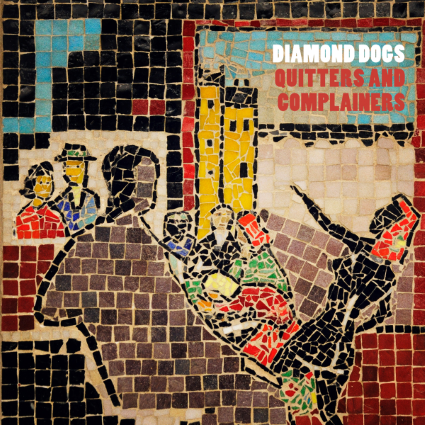 At the risk of making a real clanging namedrop, MV interviewed Diamond Dogs singer Sulo recently about another project he is involved in. Eager to conform to every journalistic cliche there is, we asked him what in his opinion was the best song he’d been involved in in his career. His answer was pretty unequivocal. “Broken,” he said. “From the new Diamond Dogs record, check it out.”

So we did. When the album came it was the first thing we went to listen to. Oddly, for a bloke that has made so much thrilling, hedonistic music over the years, the track he’s picked is stripped back, acoustic and fragile, kinda like Dogs D’amour used to be when they laid it all on the line back in the day. It’s a fabulous song. We’d disagree (respectfully) with his assertion that it’s the best thing he’s done (good god, he wrote a song called “Hand On Heart” once which is one of this reviewers absolute favourites), but if nothing else it proves this most wonderful of bands is back and firing on all cylinders.

In the well over 20 years since they formed, over all their albums and throughout all their line ups these dogs have barked essentially the same tune. A dash of Bowie, a lot of the Stones, a sprinkling of T-Rex and loads of Organ. Basically, they are the band the Georgia Satellites would have been if they had grown up in Northern Europe.

Brilliantly they have never given a monkeys toss about trends – remember, this is a group that firmed at the very height of grunge, caring less about the grim insouciance of the “here we are now entertain us” generation and actually being the entertainment themselves.

It takes about three seconds of the cocksure opener “Runaway Romeo” to let you know the boys are back, baby. The slide guitar, the thought that the thing might break into “Hey You” by The Quireboys at any moment, the catchy chorus. It’s all here and it’s all superb.

And so it goes. There’s a wonderful lack of self consciousness here, most evident on the Slade-like “Alright Alright, Alright,” “Stop Barking Up The Wrong Tree” and “Rollercoaster” which are nothing more than the soundtrack to any good time you ever want to have.

There’s a couple of times when they experiment a little, there is a nice touch of funkiness about “Silver Star Delight” and “Back To Babylon” is as unrestrained as rock n roll in the late 1950s and Jerry Lee Lewis would love it.

After “Broken” there’s a couple more whiskey soaked ballads, “Goodbye Troubled Soul” is the pick, and just in case it wasn’t clear enough that this was special, “Get Out Of My Heart” which ties up any loose ends that were left, is along before the end to explain it clearly.

The Diamond Dogs ladies and gentlemen. Still doing it just how they please after 22 years and rock n roll never sounds quite so authentic.