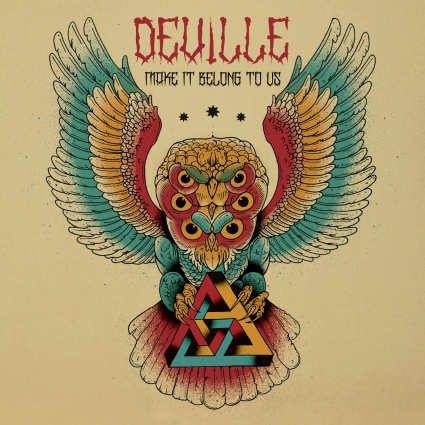 When this record arrived in the inbox, the name took MVM back to 1990. Summer 1990 when the 15 year old MVM thought the world revolved around Poison. That band had a guitarist called C.C Deville and just for a minute we wondered if it was a solo record, “he hasn’t, has he?” we wondered. Well, no he hadn’t, but then this Deville had.

And it’s all rather mighty.

This Deville isn’t from the Sunset Strip (unless Malmo has a Whiskey a-go-go club) but this slice of fuzzed-up gloriousness is their fourth album, and it might just be their most accomplished yet. From the tribal beginnings of it’s almost title track “Make It Belong To Us” is a magnificently conceived and fabulously thought out record, full of twists and turns.

Because just when you think you’ve got it, or even a particular song, sussed, then along comes something else you weren’t expecting. “Chief” for example, might pulse and ride a tidal wave of urgency – as if it has somewhere to go and only the outside lane will do – but “Mind On Hold” is prepared to take its time and stomp around a little.

Impressively, “……Us” makes all these points without the recourse to go to a huge jam as some would. The brevity actually adds to the feel of things. “Drive”, which recalls acts like The Sword with its psych-influences, would, in most hands, need about 15 minutes to get the job done. Here it only requires just over four.

The Led Zep-ish “Life In Decay” is built on a wall of sound and is absolutely riff-tastic and that feeling permeates songs like “Dying To Feel” too, while “Reflecting Surface” occupies the same kind of Southern-fried ballpark as Corrosion Of Conformity.

“Make It Belong To Us” saves the best for last too, “What Remains” is a quite superb track and if you aren’t seduced by its charms and bellowing “leave it all behind” in its chorus then there really is no hope.

Founder member of the band, singer Andreas, has never sounded better and the same goes for the rest of his mates too. There’s a chug, there’s a groove and there are hooks here that’s just better than what Deville have managed before, on “Make It Belong To Us” they’ve finally owned it themselves.