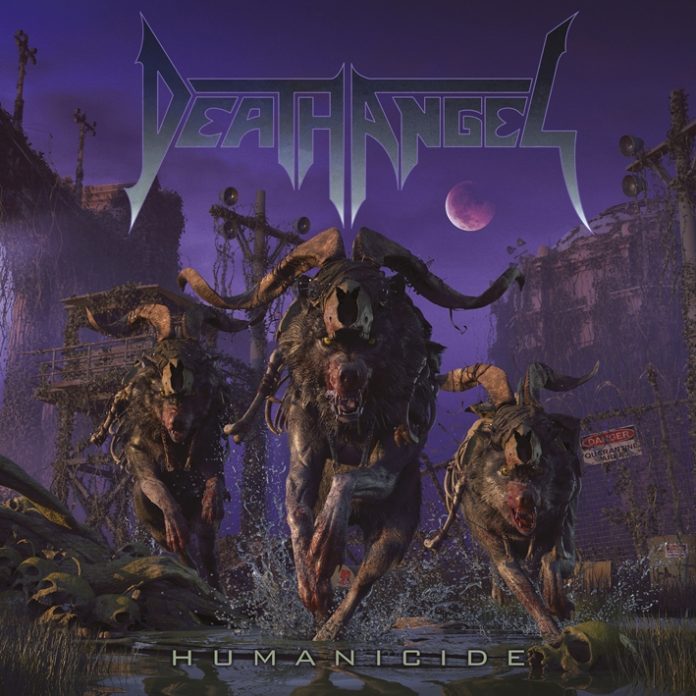 Whilst I don’t go in for the “rock is dead/dying/ain’t what it used to be” narrative that gets trotted out every so often when somebody or other wants to make a soundbite, if there is one strand of this heavy stuff that has been struggling over the last few years, then it is thrash.

The Big 4 are all – sort of – still around, but three of them aren’t thrash bands anymore, not really. And of the new breed, only Warbringer have – in my opinion anyway – done anything consistently brilliant over the last few years.

Which leads me to the point that if the “Big 4” aren’t doing it, then thank whatever you want to that bands like Testament, Exodus and Death Angel exist.

In particular in this case you can thank Death Angel for an incredible decade, because “Humanicide” is their fourth album since 2010 and like the others it is brilliant.

It is brilliant because unlike some other bands of their vintage, they haven’t watered anything down, moved into hard rock (mostly), or conversely, they aren’t content to tread the same old path. This is vicious, brutal, but resolutely modern.

The band themselves credit their Producer with that. “We love the sound [Jason Suecof] gets. With his style of production and our organic style of thrash… that marriage [is] visceral. He’s very contemporary, but still raw,” is how singer Mark Osegueda – who like guitarist Rob Cavestany has appeared on all the bands albums – puts it, and he’s bang on too. That is what these ten songs offer.

“This is who I am” sings Osegueda, and whatever he’s talking about, you can’t help think he’s referring to the music in general. Few bands seem as steeped in what they do as DA.

It’s not like there aren’t enough targets to hit. “Divine Detector” deals with those who want to start “holy war” but the drumming here from Will Carroll is stunning. “Aggressor” is particularly interesting, given that it has a progressive side, but still pummels you into submission.

“I Came For Blood” kind of has its clue in the title, doesn’t it? Crikey, all it wants is a moshpit and an old school freak out. If it had hi-tops it would be wearing them. This is balanced out by “Immortal Behated” though, which not only is long and pretty involved, it has a hard rock type verse and piano lick. And is still as heavy as hell. It shows perfectly what modern bands can – and maybe should – be doing.

Mostly, however, this is a beatdown. “Alive And Screaming” wants to “expose the ugly truth” and does. “The Pack” is dedicated to their fan club of the same name, and there is a real feeling of them all being an army against the world here. It is strangely warm and uplifting. In truth, thrash at its best has always sounded like it would front up to anyone. “Ghost Of Me” is rough, ready and almost demands you fight it.

“Revelation” dials down the moshpit antics a touch, swapping its toxic waltz for something a little more Symphony X-ish. It’s muscular, but it has got a groove you can’t ignore too. “Of Rats And Men” almost brings us full circle. If the opener dealt with the ruination of the world, then the last one offers no silver lining. Merely this: “you’re just another lazy waste of space”.

Whether that’s specific to one person or all of us doesn’t matter much. Thrash lives on anger. And there is much to be angry about in 2019. Just look at the news, wherever you choose. It makes you wonder, really why more bands aren’t doing things like this. Maybe they can’t, or they are just not talented enough. Whatever it is, though, “Humanicide” is the best thrash record in a very, very long time.