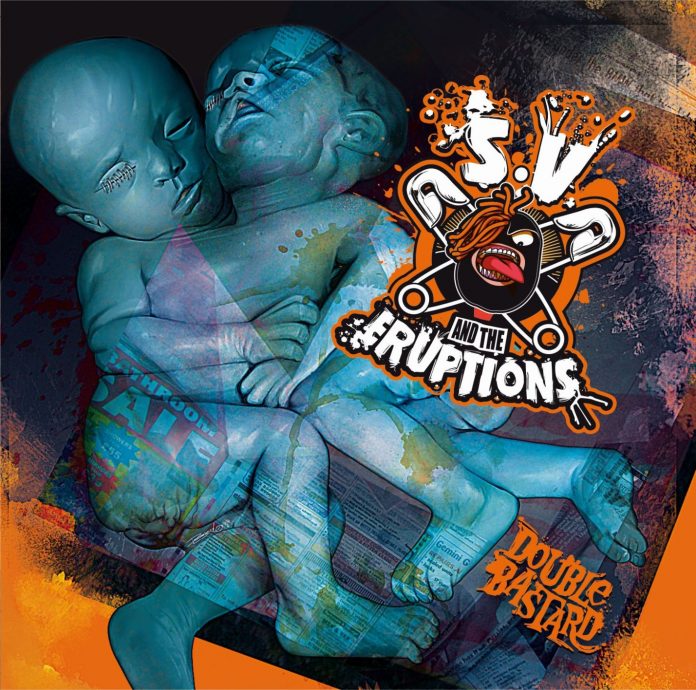 Spunk Volcano and the Eruptions may contain two members of UK punk rock and rollers Dirt Box Disco, but they are far from being a part-time side project. ‘DOUBLE BASTARD’ is their Fourth full/Double length album and their sixth release in almost as many years.

Taking on lead vocal duties, Spunk Volcano has free reign to indulge himself and his song writing to whatever style he sees fit.  From poppy love songs, to hardcore thrash and everything in between, there are no rules or boundaries for him or his Eruptions. But much like his work in Dirt Box Disco, for Spunk Volcano, the melody and the sing-a-long always remains the number one focus.

These are songs of everyday life and relationships, shaped by growing up on an estate and by SV’s years in the punk scene. The album is well produced and the band as you would expect are very tight, the playing, vocals and backing vocals are great. There are some real anthems of this album.

The influences are many and include the Ramones, Rancid, The Damned, Motorhead, GBH, Nirvana, Alice Cooper, Supersuckers, The Beatles, Leatherface, Bowie, Bad Religion, UK SUBS, WASP, KISS and no doubt many other countless rock and rollers.

Opener ‘Teenage Teenagers’ is a great pop punk tale of growing up and has them in reflective mode.  ‘Fixtures and Fixings’ and many other tracks have a modern day kitchen sink drama feel about them, the choruses are classic and the guitar solos sit well in the songs. ‘Shit Excuse’ is a slow rocker that many of us that have had friends for years can relate to.  ‘Marvellous Manifesto’ about being apolitical, in today’s world is probably the best place to be. As its antidote ‘Super Duper’ is an all-out rocker which implies that super heroes have a greater chance of sorting out the shit that the government can’t and who could dispute that.

This is an album moving from the pop punk similar to Dirt Box, to tracks with a much heavier feel which can be heard on the later tracks on side one such as ‘Independent Fire’ with its haunting guitar bordering on the likes of Black Sabbath, Iron Maiden and Judas Priest. ‘Red Rings’ is a tale of estate living and the kind of person many of us can relate to and Spunk is clearly an angry man letting off steam. ‘Spare Room’ feels very much like a track Dirt Box might do and is clearly based on someone’s personal experience.

‘Road Rage’ is a short hilarious rocker ‘Fuckin Idiot’, is probably the best chorus for a song like this. ‘Old Wives Tales’ in contract is an interesting departure and shows they can play whatever they like, with its bongo rhythm and swinging guitars to end the first disc.

‘Death or Glory’ is classic pop punk and for me the best track on the whole album, with great guitar lines that fit into the song and class drumming. ‘Sucking Up’ is a tale of band ligger’s like a modern day take on Eddie Cochran’s Something Else, not that Eddie Cochran would sing ‘Wanker Wanker’, ‘Scared of Needles’ is an hilarious full on rocker with a great singalong chorus.

There are some great tales of life here ‘Dirty Pictures’  is topped with an amazing guitar solo and some wonderful bass licks, ‘Here Come the Zombies’ and ‘Inbred’ are frank takes on estate life that is clearly drawn from personal observation/experience.

‘Daft as Brushes’ is a great mix of stupidity and sadness with an infectious guitar lick that the punks of a certain age will no doubt relate to.

The album is relentless which is what you would expect from SV who seems to give everything he has to everything he does, which ‘99%’ nicely reflects and the 2 discs show this band can write some of the catchiest punk tunes around.

Closer ‘You Think Your Rock n’ Roll But You’re Not’  is a tight rock tune with metal solos and being almost too short acts as a great end to the album which is definitely rock and roll.

Not very often you get 2 bastards for the price of one.