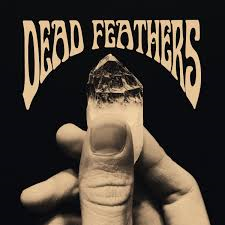 Taking their cue from such luminaries as Fleetwood Mac, Blue Cheer and The Velvet Underground you would be right to expect something a little bit different and challenging from Chicago’s Dead Feathers.

The EP was originally in demo form and was released in 2014 however since the band have now signed to up and coming label HeviSike Records the EP has received a touch up and sounds much the better for it. There is a thematic element to the EP and that is an exploration and celebration of the Native American history and culture. It’s an important topic, particularly for band member Tony Wold, and given the USA’s somewhat chequered history with their indigenous back story it is refreshing and vital that the heritage of such a rich and varied people is given the respect and spotlight it deserves.

There are times on the EP where the music truly takes you on an uplifting journey. That journey starts right at the beginning as the desert-like 1970’s soundscape of opening track “With Me” plays like a haunting ode to a lost soul. There is a hint of a shamanic trance about the track and that draws the listener in with both ears and mind. No easy task in the age of disposable music.

Marissa Allen’s vocals range from the bluesy rock of Janis Joplin to the non-lexical sounds of Clare Torry on Pink Floyd’s “The Great Gig In The Sky”. The guitars of Wold and partner Tim Snyder complement the talents of Allen perfectly. They set the tone along with the rhythmic drum patterns of Jose Bernal and the bass or Rob Rodak tying everything together, not unlike The Dude’s rug.

“Night Child” appears with a little more verve and intensity that its predecessor but retains a similar structure and pace that allows the track to seamlessly follow on from the opener as if part of the same track.

In promoting the EP the band themselves advise “We play music because it makes us feel good and we want to share that with people – it’s like a drug. We want to continue the path that generations before us have trodden…music is real and raw – it brings us closer to each other and teaches us to understand the world better – a code to live by.” Lofty ambitions then for the quintet but it’s not an impossible task as even a cursory listen to ethereal charms of “Color Exhaustion” will make a believer out of you.

“Horse and Sands” has the honour of closing the EP and it’s the heaviest and potentially most commercially accessible track, not that such things matter to a band bent on ushering a new wave of psychedelia less reliant on colourful excesses of the 1960’s and more in keeping with a deeper and richer pallet that comes with true purpose and creative energy.

There is more than a touch of originality that flows through this quintet which over the course of the next few years will separate them from the occult/retro crowd and allow them to forge their own unique path. Where that path will lead is anyone’s guess but based on the four tracks on this EP it may well be a path that is paved by the spirit of something stronger than the band themselves.

If Psychedelia has come back around then you might just see Dead Feathers pointing the way forward.