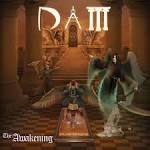 In 2014 Brazil had one of their more memorable years in recent memory and whilst on the surface the majority of the country was getting caught up in World Cup fever, well until THAT (Brazil 1 Germany 7) match anyway the musical South American underground was rumbling and making noises far darker and more intense than the football lovers in the Maracanã.

Belo Horizonte’s D.A.M. can be best described as a melodic power/death metal band with symphonic/classical tendencies. At least that will probably do for now. More importantly they are a good band. A very good band in fact.

Formed in 2009 as a side project for vocalist Guilherme de Alvarenga (bassist from fellow death metallers Hell Trucker) the band have released a couple of EP’s as well as their debut to much acclaim in their homeland and beyond. The Awakening is their second album release and the cinematic opening structure of “From The Ashes” shows that they are very much playing to win.  There is nothing half-hearted or “by the book” on this album.

An initial note of caution that bears consideration is that historically there can be a tendency for this type of music to, let’s be kind, repeat itself and although there are certain signatures that sound familiar as the album progresses it thankfully falls someway short of AC/DC-esque repetition. That said the opener does give you a perfect indication of what this band are all about.

“From The Ashes” kicks things off in glorious a fashion, the slow orchestral beginning soon leads into a symphonic maelstrom of super-charged darkness accompanied by some breathtaking composition and structure.  Vocally it swings, like the devil’s balls, between blood-curdling screams and squeals to clean and composed lines that could be pulled straight from any radio hit, do they have them anymore?, of the last few years.

At times it comes across like a Cradle Of Filth doing Nightwish covers, which is a compliment, as it illustrates both the darker and more symphonically intense aspects layering perfectly with the vibrant, and occasionally playful, melodies. “Violated Angel” is a fine example of this as it displays the manic energy and haunting tones that COF have made their stock-in-trade but at the same time there is an eerie, other worldly innoncence in the melody that makes it uplifting.

The production is crystal clear and allows the heavier movements to burst forth whilst keeping the melodic elements swelling in their own vortex of beauty.

Oh, for the football followers among you, you will be relieved to know that this album is far more like Neymar than David Luiz.

For all your D.A.M. needs check out the following sites:

Disclaimer: To be honest MV are not fans of shouty/screamy verses followed by sing-a-long choruses so it needs to be something pretty darn good to grab our attention and, more importantly, keep it. We generally prefer our vocals screamy/shouty all the way through or not at all.