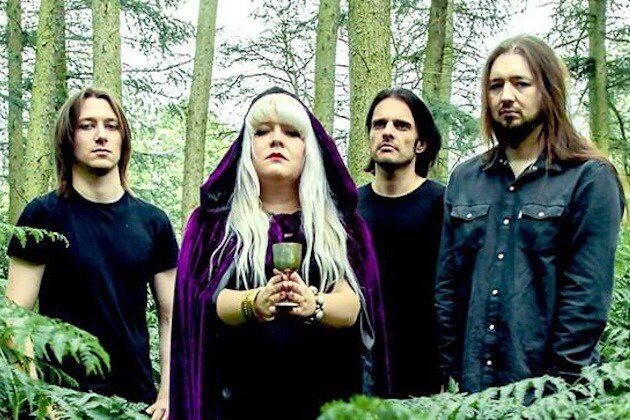 Life on the road with the “smuttiest band in doom!”

Glam rock gods Cinderella seem like an odd place to begin an interview with Doom Metal gods in waiting, Alunah, but at the start of their 1991 album “Heartbreak Station” there’s a track called “The More Things Change.” “The more things change,” sings Tom Keifer in its chorus, “the more they stay the same.”

The reason for this musing is that it is exactly four months to the day since MV last chatted with Alunah. We did so in the back of a pub prior to their album launch show. Now, we are sitting in the front of another pub just a few hundred yards away with them for a little catch up before their latest outing in what is basically their home town. Time flies when you are in a heavy metal band it seems.

To recap on our last meeting. We had learnt a few things. First, that frontwoman Soph Day has a dodgy pop past involving Take That. Second that drummer Jake – rather like MV – likes Belinda Carlisle a little too much.

Today the bombshells just keep coming. Jake – who had told us when we tried to round the band up for a chat, to “go and find Soph as she’ll make more sense” – has a bit of a Status Quo thing going on and moreover that he emailed Soph the cover of their latest album “Aquostic” (for reference it has a picture of a naked Rick and Francis with only a guitar covering their bits). The singer recoils at the memory: “I mean, ewwww,” she laughs. “There was a little bit of sick in my mouth.”

More importantly though, there is another issue about being in a rock band on the road. There’s no nice way to put this. Farting. Time spent in a van with guitarist David, it transpires gets a little bits smelly, which is kind of a problem when you are on the road: “we’ve been all over Europe and it’s not been pleasant. I mean he does it as soon as he gets in the van,” say the band, giggling.

If all of this seems a world away from the music of Alunah, which is heavy, dark and oppressive, then it’s supposed to be. The four are relaxed in their own company – Soph and David are married – and along with Jake have paid their dues in this band for years. The one exception is bass player Dan Burchmore. The latest in a long line of four stringers to pass through the ranks over the years (“I think we’ve had about eight, but Dan can stay,” grins Soph.) but he has very obviously fitted in seamlessly.

We’d best put our serious faces on and get down to business, then. The day after the album launch on the first of October, the quartet got in their van and headed to the continent. They had spoken with genuine – and rather touching – excitement about going to Paris for a concert, so did it live up to expectations? Happily yes. “It was a great gig, in a beautiful room, where Picasso and Toulouse Le Trec used to go,” says the singer. “There was a good crowd too, so everything went really well.”

Or should that be everything went really well when they eventually got there: “It was a bit of a worry at one stage,” admits Soph. “The Friday night traffic in Paris was horrendous, and we were in the little van, still we got there in the end.”

Transport issues seem to have dogged the band, as they explain: “First the bus broke down, so the hire company came and gave us a new one.” Everything was fine, until that one went wrong too, with Jake adding: “4000 miles over the Alps in a broken van!”

Whilst in the Alps they were supposed to play the second stage at the Swiss Up In Smoke Festival, but one bands misfortune was their gain, as touring partners Lonely Kamel couldn’t make the gig, they asked Alunah to take their place on the main stage. Which brings us round neatly to touring.

There was a time back a few years ago, that you couldn’t go a week without seeing Alunah playing a gig somewhere in the West Midlands, now those appearances are much, much rarer. This is their first gig in the city since that one in October. It turns out that this has been a conscious plan. “We didn’t want people to get sick of seeing us,” admits Soph, with David adding: “I just think if you want to be big, you’ve got to get out there and make it happen for yourself. Play gigs everywhere, get people to know you, there’s no point in playing the same places again and again.”

To that end the night before our chat, the band had been in Glasgow, “It was a great show” but cold!” says David. MV suggests that despite bringing the subzero temperatures down here with them (the interview is conducted with us all wearing coats) they must be glad to be home. Sophie Day’s honest answer is a little surprising: “I’ll probably enjoy last night more,” she admits. “I’ll know a lot of people in here, last night I knew one person. I’d rather play to a room full of strangers than a room full of friends. It feels more of an accomplishment.”

In a little under three hours after our chat, Alunah do take to the stage, in the freezing cold back room. And they do so with considerable panache and skill. There is a confidence about them, and if the music doesn’t quite demand a swagger, it is certainly a cut above the norm in terms of its delivery.

Soph described the music a little before: “Someone said to me last night,” she recalls. “That we sounded like all the things we like, a bit of doom, a bit of psych, Janis Joplin, Sabbath but we’d put our stamp on it. I thought it was really cool. I hope we have done that.”

Alunah, for all the laughing and joking are absolutely serious about music, Sophie talks about her pride in playing with the French psych Lords Mars Red Sky (“my album of last year” she declares.) The band give every indication that were they not playing here tonight, they’d be here watching.

But they know they’ve got work to do too. Last years brilliant “Awakening The Forest” – their third album but first for Napalm Records – needs a follow up soon, but there’s no rush: “I’ve got some ideas for things, and there’s a track that didn’t make “….Forest” that we’d like to use, but nothing is really laid down yet,” says the front lady.

Instead the plans for this year involve touring – the band say they are hoping to go out later in 2015 – and they also speak of wanting to play Scandinavia, which would be a first for them.

The dumb thing that everyone thinks is that life on the road in a rock band must be glamorous. According to those that know, not a bit of it! “We’ve never been a druggy band, so there’s no drugs. There’s rock n roll I suppose, but no sex. Definitely no sex,” says Sophie laughing, before asking: “I’ll bet you didn’t know we were the smuttiest band in doom, did you?!”