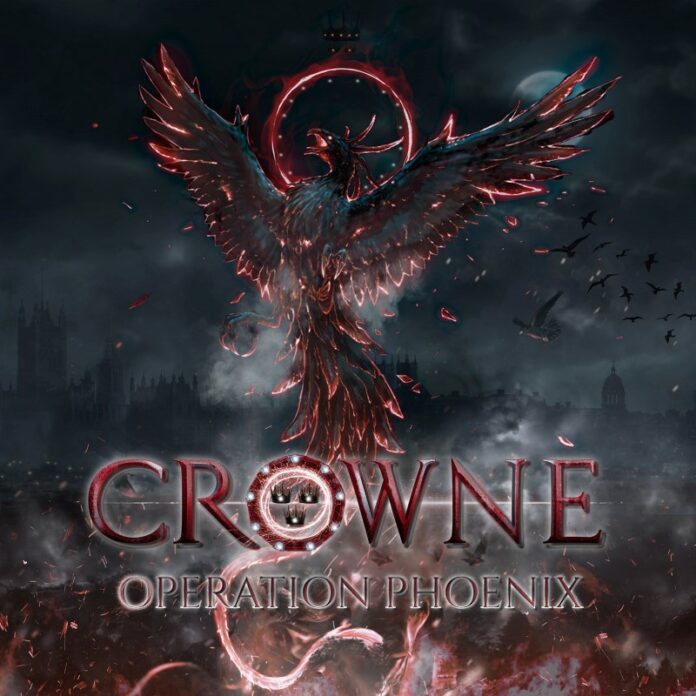 You know when you were a kid getting into music and you always got those compilation records at Christmas because well-meaning family always thought you’d like them? You know how when you like metal everyone assumes you like all of it?

That’s basically all you need to know about Crowne, except the good people at Frontiers Records might reasonably expect me to have more to say about it than that, so here we go.

Indeed, the more keen eyed reader might have worked it out already at the mention of Frontiers, but this is a supergroup (of sorts) and that’s what the label often does, it puts things together and they usually sound like a million dollars. This is no different and in fact might be described as the most Frontiers release you can imagine.

Look at the names that comprise Crowne: vocalist Alexander Strandell (Art Nation), keyboardist/producer Jona Tee (H.E.A.T.), bassist John Levén (Europe), drummer Christian Lundqvist (The Poodles), and new full-time member, guitarist Love Magnusson (Dynazty). Even if you have a passing interest in melodic metal, you know some of these names (and perhaps more of their bands?) but it’s like watching a treasured favourite film – just because you know what’s coming doesn’t stop this being any less good.

The opening title cut tinkles away on its piano before some strings and guitar so strident that it probably has its own spandex pants. That’s all within the first minute, by the way.

This is a record where bombast is praised, where the hooks are bigger than the hair in the 80s and in short (to borrow a line from Frasier) the maxim is “if less is more, than imagine how much more, more could be.”

“Champions” does power metal. Even Hammerfall look on ominously here, because Magnusson is wonderful, he is throughout, but especially on this. Fists? They’re in the air, mate and Tee is the pillar “In The Name of The Fallen” is built on, and “Super Trooper” (which thank whatever God you like – we’ll go with Lemmy – is not an Abba cover) stacks the harmonies high.

And yes, its easy to smirk at this, or it would be if it wasn’t so unashamed. All the things I’ve said about it so far are surely known to everyone involved, and they are out and proud. For example, “Ready To Run” is so 80s Joan Collins is dusting her shoulder pads off, but its brilliant.

Scanning the tracklist, as you do, I’d assumed “Juliette” would be a power ballad. It isn’t – at least not the ballad part – and “The Last Of Us” likewise is muscular, hook laden fun. Sort of like Magnum if Tony Clarkin fancied a tilt at Eurovision, everything here sparkles.

“Just Believe” is even a little more modern in intent, but it matters not, because it sounds like Crowne and it has to be said too, that Strandell has the perfect voice for this. He’s one of the best around at singing these type of songs.

“Roar”, and if ever an album needed a track called “Roar” then its this one, has touches of Avantasia (I suppose you could say ‘of course it does’) but its got a crunch all of its own. “Victorious” has a gallop – and this, by the way is a thunderous metal band, this is not AOR. The guitars soar, everything soars.

But by the end, “Northern Lights” there’s only one conclusion to be made. Somewhere in the collective minds of Crowne there’s a film playing, one that is an epic, a massive widescreen blockbuster, explosions, CGI, the whole nine yards, and “Operation Phoenix” is the soundtrack.

The word “fantastic” has two definitions according to the Oxford English Dictionary.

Pick one. They both apply here.

Previous article
REVIEW: J.D SIMO TRIO – SONGS FROM THE HOUSE OF GREASE (2023)
Next article
BAND OF THE DAY: DEMONS DOWN