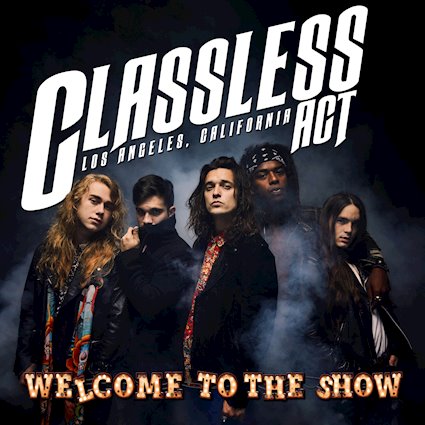 On the 18th September 2020, we had a story on the website, entitled “Today’s the day for Derek”, on which a “cross-genre rock n roller” from LA launched a single. He’d played with Ted Nugent, Steve Vai and Living Colour amongst others.

In the quotes on the piece, Derek Day said this: “It’s a song of longing. In this day and age, everyone is so hungry for connection…..”

I am not going to lie here, I probably didn’t even read this at the time, or if I did I wouldn’t have taken notice. Indeed, I only saw it this morning because I was reading about Classless Act and did one of those “I am sure I recognise that name” things with their singer, but those words resonated with me.

A year or so before that single, he formed what became Classless Act, a band that had met via social media. Then they got a record deal with a major label and announced as the opening act on the Motley and Poison tour that was going all round the US. Overnight sensations, sort of.

That fact is they deserve it and if the Motley shows perhaps explain the presence of the Crue’s Vince Neil on the opening song here “Classless Act”. Filthy, dirty sounding rock n roll (and the presence of the harmonica only underlines that) and if the second track, “This Is For You” – which has Justin Hawkins on – is as big and arena ready as anything (guitar duo Dane Pieper and Griffin Tucker have listened to their share of Slash) then that seems to indicate that all the things you expect are in place.

But if this is arena rock, then its arena rock for the 21st century. “Time To Bleed” might as well be an Alter Bridge song, and if it was Messrs Kennedy and Tremonti are sticking a gold disc up in their houses, and this – to be fair to it – isn’t the cliché that I’d expected.

“Picture On My Phone” is a ballad for the modern age, which is fine, but it just seems to suit the band when they are doing the big, bold and the brash. “All That We Are” seems to have reprised Oasis’ “All Around The World” and turbocharged it, plus there’s something just a little weird about Classless Act that will be fun to explore as they grow.

“Made In Hell” is a good example of what we mean. Peel the layers away and its more interesting than you’d imagine, and there seems to be an effortless way of going “large”. “Strom Before The Calm” underlines that. “Haunting Love” (the one, scanning the tracklist, you’d picked out as the ballad) has an energy, and a harmony.

“Walking Contradiction” (which kind of sums the band up) is as theatrical as Muse. Special mention here to Chuck McKisscock who is excellent on drums throughout, but really drives this home. “Give It To Me” gives all the AC/DC fans around chance to get ‘em up. I haven’t checked their setlist, but if this isn’t played every single time, then I’d be staggered and if the one thing this record was missing, perhaps, was an acoustic ballad, then “Circles” has you covered.

It’s the last one, though, that most leaves you thinking there’s more to come. “Thoughts From A Dying Man” isn’t the type of thing you got on many Warrant records back in the day. “Isn’t life just a painful way” muses Day, “to prepare us to live after death?” See, remember when these bands were mixing up the batter so you’d lick the beater?

Which is why the usual conclusions don’t apply here. As much I despise the usual trope that Nirvana came along and glam rock died (its nonsense), then nearly are Classless Act a glam rock band that is retro. No, “Welcome To The Show” you suspect, is only act one before things develop.