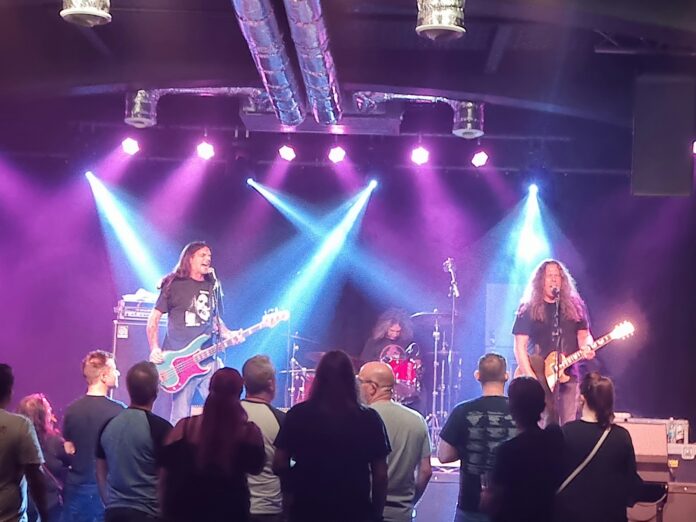 “Who’s staying round after the show?” The Atomic Bitchwax’s Garrett Sweeney has things on his mind. Most of the blokes on the front row answer in the affirmative. “Alright, it’s ooonnnn” smiles the singer/guitarist.

And that, right there, is the vibe of the gig. To be accurate, they didn’t even announce this here show until Thursday. They should, about now, have been in Leeds playing at The Dominion Festival but that was cancelled last week. These boys, though, they love to rock. They love to roll. They’ve been over here with Nebula, so why waste it?  So they turn up, plug in and bang their heads. A lot.

That’s what The Atomic Bitchwax have done for 23 years. No frills. Just riffs. Just solos. Just bass. Just drums. They’ve all been in Monster Magnet (two of them, Sweeney and drummer Bob Pantella, still are) but there’s something just a little more underground, a little more of a gang about TAB.

So, with a cheery “you know who we are, right?” they begin and end with “Frankenstein” but it almost doesn’t matter. They are mostly about fun and loud, loud shit.

“Hope You Die” from their lockdown record “Scorpio” is the best. The absolute best. There’s nothing quite like it. Except, in a way all the songs are a bit like it. “45” is likewise thunderous. Pantella must hate his drums the way he beats them, and if Sweeney almost seems like he’s on a mission to play as many leads as possible in a one hour show. There’s about 47 in “So Come On” alone it seems.

His co-frontman Chris Kosnik is equally pre-occupied, but if he’s going to stay around after, its hair of the dog. “I’ve a confession,” he offers. “I went out last night and got wasted, so I am going to try my best.” He manages just fine on “Birth To The Earth” from their debut record back in 1999, and likewise, when they lock into a groove on one of a couple of instrumentals – “War Claw” and “Ninja”, in particular shine, they do it as well as anyone does.

“Kiss The Sun” is dedicated to the “girls in the audience” – there’s six by show of hands – and they get fists in the air with “Liv A Little”.

They were never going to encore. Rock stars do encores. Rock stars don’t play for no other reason than they want to and can’t face a night off. Sweeney acknowledges this: “look, pretend we’ve gone off” before they do “Force Field” and the brilliant “Shit Kicker” which ensures a raucous conclusion.

Keith Richards Twitter Feed carried a quote this week. “Solos come and go,” it said. “Riffs last forever”. Here they lasted an hour, but my goodness it was as sweet as it could be. And, dare we say, as sweet as three piece band’s always are.

Not that The Atomic Bitchwax care too much. They are going home tomorrow and don’t see why the party should end. Those drinks on the bar aren’t going to drink themselves, are they?