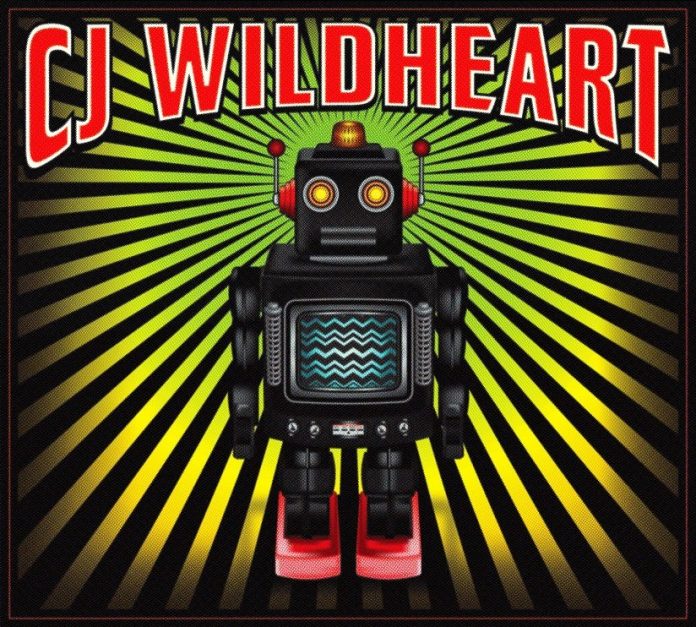 Those of us that have followed the career of Chris “CJ Wildheart” Jagdhar from his days as a Tattooed Love Boy all the way through the journey to The Wildhearts glory years, the shoulda been the biggest band in the world Honeycrack, the glorious Jellys and beyond, know that he’s always had a lot more talent than a) he lets on and b) he’s given credit for.

He even gave up on music for a while back there – give or take The Wildhearts” yearly tour – and went to work in his animal sanctuary and make his cooking sauces, but “Robot” is his second solo album in as many years. It, like its predecessor “Mabel”, originally appeared on Pledge Music last year but in common with Ricky Warwick’s recent pair of albums, this is simply too good to not see proper light of day.

It’s also a record that shows plenty of different sides to CJ. For a start off its a lot heavier than the stuff you might usually associate with him. The title track opener has a real crunch to it, and screeching guitars abound all over the follow up “Light It Up” too, and there’s a genuine almost thrash feel to the intro to the viscous “F.U.B.A.R” that is about as far removed from the “Strawberry Ice Cream” and fluffy bunnies of The Jellys as you can possibly get.

And yet, this could have only come from the mind of CJ, as it remains unmistakably him. His voice sounds like no one else, and even when he’s trying different things – the electro opening to “Ctrl Alt Del” for example – a trademark melody and that guitar sound isn’t far behind.

It’s this that makes “Robot” so good, that it’s progression without throwing away the past, and if sometimes during his career CJ has been more than than happy, rather like the Assistant Manager at a football club, to not seek the limelight alongside brethren that found that more natural, he does so to great affect here.

A ten track collection that is fully prepared to take risks, when it gets right, as on the stunning “The Box” then “Robot” is a thing of great beauty and skill, and as in typical style nothing here outstays it’s welcome, then there’s no flab here.

A couple of moments are right up there with anything he’s ever done post Wildhearts. “Delirium” is built round a huge hook which sees the subject “chucking up for queen and country” over a throbbing rhythm and “No Rhyme Or Reason” is like Honeycrack with a synth riff, while the closing “Sasquatch” is a more widescreen effort, and its ambition seems to sum up the whole record as a whole.

The world of music was a poorer place when CJ was on hiatus, but the man who makes the Devilspit sauce has rediscovered his devil may care attitude. “Robot” isn’t afraid of anything, and it’s aims are more than matched by the fine execution of the songs. If there will really never be another Wildhearts record than this type of collection makes up for it.