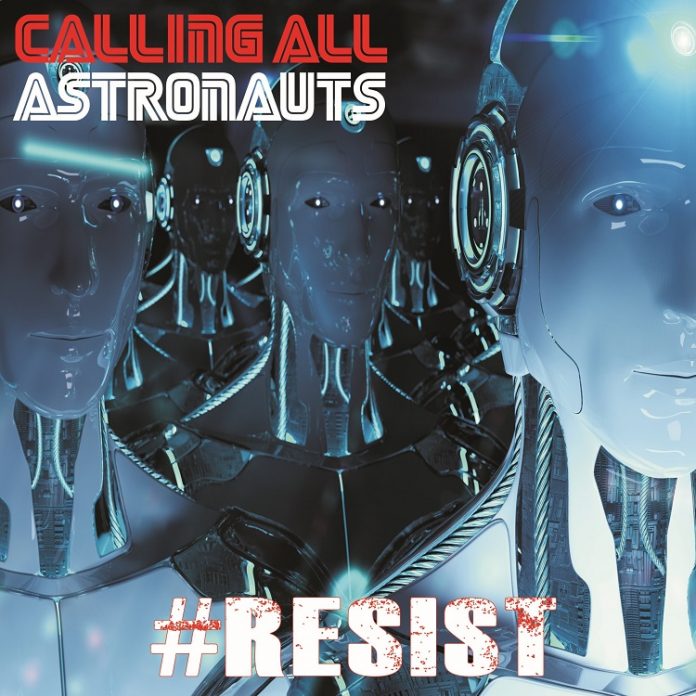 It’s funny how different times influence the way you review records (well, if you do them like me, anyway, and treat them almost as diaries). If I’d have done Calling All Astronauts “#Resist” last week, I may have launched into a tirade against Facebook, resisting Mark Zuckerberg and how the platform was the biggest threat to democracy there is (it is, which is why that is still here), but somehow given World events in the last few days, the rioting, the righteous anger, Statues that had no right to be up in the first place ending up in the River Avon, it gives you cause for pause.

In that context, there is only one place to start with this: “The Divided States Of America”. On which David B. spits this. “The divided states of America, didn’t know what they were voting for.” My argument is: what if they did know? Isn’t that more chilling. Like with the death toll from Covid-19 in this country. What if they aren’t just incompetent? What if tubby and his mates don’t care? The thought of both things scares me to death.

On that second one B explicitly mentions “Black Lives Matter”, which gives this a little more current cache than you might have expected, but right from the off here, “The Holy Trinity” (“greed, power war” is the triumvirate) they lay their cards on the table. “Empowering fascist and racist scum, this ignorant scum, this ignorant mind-set doesn’t benefit anyone”. Except again, my argument is that it does: it benefits the scum in charge.

The music – as this is a record review after all, not my political manifesto (crikey, wait for the conclusion, I may get arrested) – is as stark and bear as it needs to be. “Give Them A Leader” sounds a bit like Sleaford Mods dropping E’s with Ministry in some dank, dingy night club (look I’ve got dungeons in my head, I’ll be honest). “Rapture” is more industrial, not a million miles from NiN, the bursts of guitar are much fun, and the three piece have a real interesting way of doing things, even away from the lyrics.

“New World Disorder”,  the one where the riff kicks in. And the nihilistic way the lyrics are delivered – and I accept this is going to sound strange – isn’t far away from New Model Army. There is a definite goth flavour, though.

“Fifteen Minutes” rattles along on the back of some wonderful bass from Paul McCrudden, and takes down ephemeral pop stars, pretty surgically. It is surprising just how heavy this album is, actually, and never is that better shown than on the title track, while “Post Truth World” is so 80s flavoured I would be trying to get Dawn Hughes to dance with me at the school disco, and if “Reason” moves it forward a decade or so, then it still hits home: “Give me the reason” offers B, “Why you’re so full of hate”. As opening lines go, it’ll do!

I’ve struggled to pick a highlight on this – given the strength of the album as a whole – but “Welcome To The Black Bloc” might well be it. Woody Guthrie used to have “This Machine Kills Fascists” on his guitar. This is the 2020 equivalent.

“Not In My Name” closes things out, and one thing I haven’t said about this yet – and should have – is that the damn thing sounds so huge. Not just here, but throughout. It is a striking aspect of the record.

I honestly don’t know if you could enjoy “#Resist” without the political debate. It seems redundant to do so, to be frank, I also don’t know if you could enjoy it without holding my views (and for the second time in a week I shall put in a review that I remain convinced that Johnson never had Coronavirus), but when you hold my political standpoint, and also when you hear electro punk as good as this, it makes for a wonderful combination.

When they take the tanks in Buckingham Palace and pull out the Child Abuser we are supposed to call “sir” and all those who cover up for him, let this be playing.