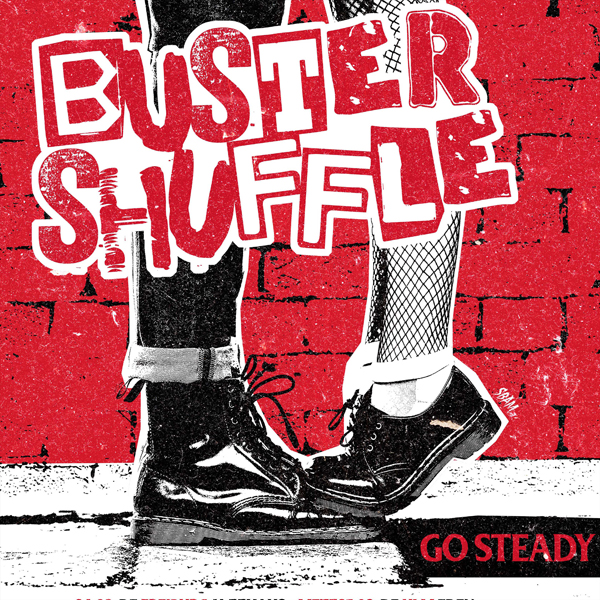 “The government gave me a number, to simplify my birth and death. It makes me identifiable, like sheep  -but worth much less.”

Is about good as it gets.

And that, is how Buster Shuffle begin “Go Steady”. “Deadline”  the song from which that first couple of lines comes,  is a rumination on the requirement of capitalism that we work “until I drop” as Jet, their singer puts it.

Perhaps, too, it’s a reaction to the two years of the pandemic, where this vile government, this coked up, lawless Etonian elite showed just how much it cared about music and the live entertainment industry. Not two shits, basically.

So this record is from the band to the fans. Crowdfunded, and the last song “Sucker Punch Blues” is included as a thank you. A live favourite, Jet skanks along with the thought: “blues, what more can I lose? I am walking in my socks cos you stole my shoes.” Yet there’s a cheery air, one that permeates the record and says “yeah, look, it’s a shitshow, and we’re going to hell in a hand basket, but its sunny, we’ve got each other and we’ve got the music.”

For the half an hour of “Go Steady” that’s the vibe. The title track lambasts “the duke of double standards” but smiles through its gritted teeth, indeed, don’t make the mistake of thinking that this is a record that preaches at you. Not at all, this is fun and warm at heart. Never more so than on “Puke In The Duke”, wherein our hero throws up in the sink of his local. Oh, and writes a song about it.

It is the official position of this website (well, me and I am paying for the thing) that Chas and Dave are the finest songwriters in the world, so you’ll forgive me for getting lost in a reverie when “This City Is Ours” and its brilliant rockney stylings come hurtling across the hill (via a little bit of Stray Cats pure rock n roll).

“The Hood” exists on harmonies and organ, “Wipe Your Nose” stomps along (its probably not about Michael Gove’s recent TV appearance), while “New Badge For My Uniform” deals with the idea that our bosses might not have our best interests at heart. One of the most strident guitar lines on the record, as the lyrics opine “my boss says that less is more.”

At its heart, though, this is an album that longs for companionship. The accordion drenched “In History I Still Have You” is a brilliant love song. You can’t call it a ballad, for it is not, which is to its credit, while the same goes for the laid back ska of “Head To Toes”.

A quite lovely album, Buster Shuffle retain their quintessential English-ness, if you will (“…Toes” for example has its hook line of “give me a tinkle will you?” which will mean nothing off this coastline) but manage to construct something that exists between, punk, ska, rock n roll and pop music, sounding like everything and nothing all at once. “Go Steady” is an example of how this should be done.