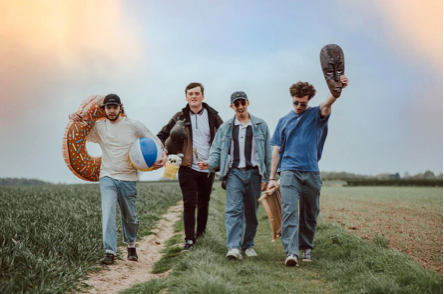 In September 2021, Spangled experienced an early career highlight when they performed their first major festival set at the Isle of Wight. Led by frontman Ben Johnson, they whipped the This Feeling stage into a frenzy with a performance that will take them to main stages in the near future. Watching proudly was Ben’s dad, John Johnson. Spangled’s biggest fan doubled up as their roadie, driving them to the festival, setting up their equipment, and then helping them celebrate by cooking them his signature dish: lamb chops. What could make a great day better? One of the best meals of their lives.

Ben and bandmates Niall McGovern (bass) and Jamie Halliday (guitar) continued the party by returning to the festival site. Returning to the campsite in the early hours, they were faced with a devastating tragedy: John had unexpectedly passed away in his sleep.

Nine months on and Spangled are set to make an overwhelmingly emotional return to the Isle of Wight Festival when they headline the This Feeling stage on Saturday June 18th. They pay tribute toJohn Johnson with their new single ‘Good Life Better’ which will be released on June 16th. It held a special place in his heart. Ben remembers how his dad broke down in tears when he first heard it, and it immediately became his favourite song. It was later played at his funeral, providing Ben with a way of grieving that celebrated a life so intensely lived.

Ben says, “My dad was my best mate. His death was hands down the worst experience of my life. Always will be. The man moulded me. But there’s beauty in fragility, it’s all about how you look at the bigger picture. We’re here to make a name for ourselves, and my Dad is very much the fuel that drives that.”

Fittingly, the song’s lyrics represent their father/son relationship so evocatively. It’s rich with imagery that reflects upon a nostalgia for childhood, and it also notes the incredible healing power of music as Ben sings, “When the music started playing and I heard the first note of our song, that’s when all the scars inside of my soul were gone.” Most importantly it celebrates those people who make our lives better – a theme which speaks to those of us who have those people in our lives, or those who commemorate their loss of such inspiring characters.

‘Good Life Better’ is a song that will come into its own at festivals. From its introspective jangly guitar introduction to the skybound euphoria of its closing hook, it’s emotive, epic indie-pop at its very best. The song was written by Ben Johnson and Jamie Halliday, and was produced by Gareth Nuttall (The K’s, The Lottery Winners).

‘Good Life Better’ features on the band’s debut EP‘Chasing Nebulas’, which prompted This Feeling to sign Spangled to their new label after describing it as “one of the best EPs we’ve heard in years.” Until now, all of Spangled’s tracks had been released entirely independently.

Completed by drummer Nathan Kenyon, the Manchester band’s cosmic indie rock is flavoured by a melting point of influences including The Stone Roses, Sly & The Family Stone, Pulp, David Bowie, The Beatles and Arctic Monkeys. They will follow the Isle of Wight Festival by returning to the This Feeling stage at the Y Not? Festival on Saturday 30th July.