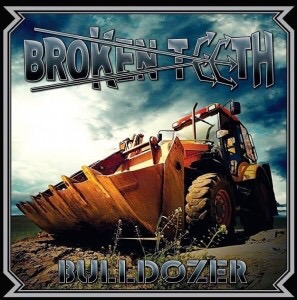 
Sometimes, you wonder what the point is.

Take “Bulldozer” for example. Seven tracks. Two are covers. One was a download only single, and four more. You could be forgiven for shrugging your shoulders and going “meh” or whatever the kids say.

Then you put it on.

And, brother, “Bulldozer” is a marvellous thing that very neatly and quickly captures the very essence of rock n roll.

“Raining Fire” starts us off and happily does so like it just wants to scream “godammit, Thin Lizzy rule” and “Red River Rising” which follows is nothing more than a beery singalong. One which, by the way, contains the line “a rock n roll baptising” and most probably would dunk you in a whiskey filled river of Bon Scott-era ACDC tunes given a sniff of a chance.

Then, to be honest, if you liked em before, you might love them after all three minutes and 33 seconds of “The Rough And The Tumble” which essentially distils Lizzy’s “Are You Ready?” and adds a dash of Motörhead for good measure.

The other original tracks here do much the same. “Flamethrower” sounds a lot like Judas Priest and utters the thought that we are “welcome to the church of speed” with barely a hint of irony, and “Devil On The Road” is a groove-tactic bassy swirl of a thing.

Then there’s the two covers. Aerosmith’s “Lighting Strikes” and “The Hammer” by Lemmy’s aforementioned boys are more or less impossible to mess up and they aren’t got wrong here either, although the former, with its organ led opening is perhaps the pick.

In truth, Broken Teeth have been doing this for years, and singer Jason McMaster has lived and breathed rock n roll since his “Sportin’ A Woody” days in Dangerous Toys, and this is a lovingly put together collection totally without a self-conscious thought in its head.

So what’s the point? How about celebrating great music? What more point do you need. Just get ready to bang your head like the old days.