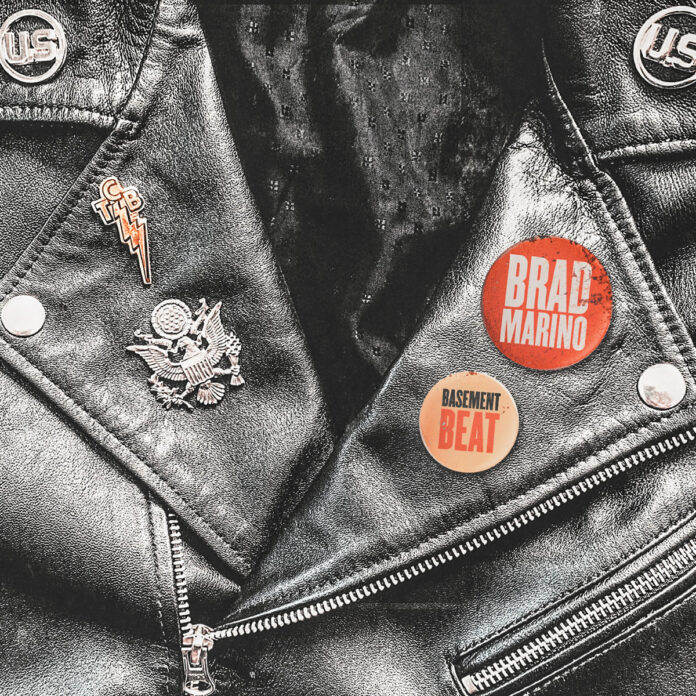 I’ve been thinking about Skid Row a lot recently. They’ve released a new album, I’ve just seen them live. During that show, Bassist Rachel Bolan took the microphone for “Psycho Therapy” from the Ramones. I’ve seen Skid Row perhaps ten times in the 31 years since I first saw them and he’s done that every time.

Which meant, being the obsessive that I am, that The Ramones were the first punk band I ever listened to.  I remember being gutted when I found out, when I was about 17, they weren’t actually brothers, but before all the punk I’ve listened to since, was The Ramones.

And why all this talk of New York’s finest? Well “Basement Beat” is a Ramones album in all but name. Brad Marino,  a MV fave, lets not hide it, has disappeared into a studio with drummer Beau-Beau Basement (perhaps not his real name….) to craft the world’s first (and if its not, don’t @ me, I don’t actually care) Ramones-core album (if those PR people that make these names up can have “blackened post hardcore”, then I’m having that!).

12 songs. 23 and a half minutes (I know this because my journey to work takes 22 minutes and I got 11 of them in) of, well…..what exactly? They’re not pastiches in the style of Weird Al, but they’re not serious either. They are not covers. They are just 12 songs that deliberately sound like Joey, Dee Dee and the rest.

That’s basically it, except there’s moments of occasional brilliance here. Like “Freakshow”, like “Communist Creep”, where they all huff glue and deadpan “one plus one don’t make three. The colour red is all you see”.

Then there’s the lead guitar. Brad, surely, legs akimbo, strung way below his knees, kicking out the jams, and producing nuggets such as “Rubber Room” which is full of beans as a three year old on a sherbet dip bender.

I swear there were moments here where I Googled to see if these were actually covers. They aren’t, as far as I can see, but “Brain Gone Dead” should be, by rights, “Sick Sick Sick Sick” must be. Either that or Marino has been in the band for years and not told us.

To be honest, analysing this is essentially pointless. “Basement Beat” is surely simply to be enjoyed, with a stupid grin on your face. “Spy For The BBI” is gloriously sugar-coated, but then you get to “That Girl”, which adds a bit of organ for grins.  “Talk Talk Talk” is beautiful in its simplicity, while “Nancy Is A Narcoleptic” is either the best or worst song in the world and I am yet to work out which.

Now, let’s be honest here.  Whether you love this or not is going to depend on your reaction to a “love song” that offers this: “for you, I’d shut my fingers in a door”. That’s the key to “Come Back For More” and Brad Marino isn’t too fussed if you like it or not, I’d wager.

“Dream Last Night”  does it all over again, and “Baby Doll” is just a touch more strident, given that it’s bass rattles, but basically, I’ve spent 529 words so far reviewing this when it exists only to make you happy. “Basement Beat” isn’t even that big a departure, given that Marino is the king of power pop anyway, but a bit like Beavis And Butthead back in the day, its dumbness is an act. “Basement Beat” is a genuinely beautiful thing.