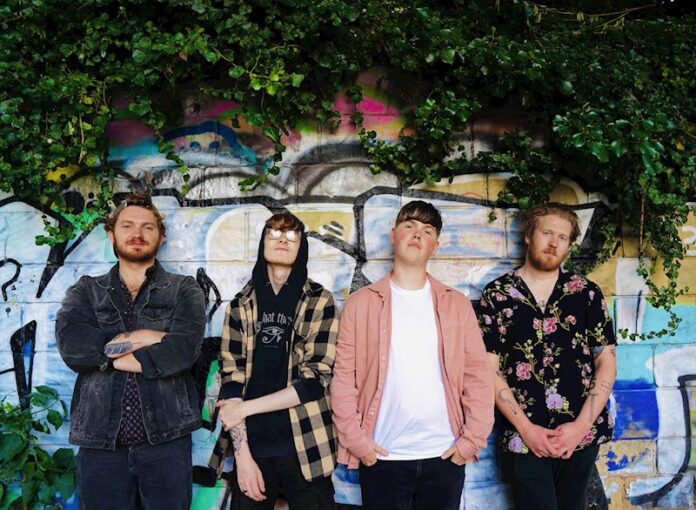 KULPA are making new friends and picking up new fans. The UK heavy rock crew set loose hugely and gratifyingly burly rock amalgamated with captivating hooks and pounding riffery. With glowing comparisons to Foo Fighters, Nirvana, and Muse, KULPA are ready to rise, and are stocked with a superb new single and video, Bloodshot, out now. Watch the video, here – https://youtu.be/zwGQWly0frI

Hitting you from Newcastle Upon Tyne, England, KULPA were born in 2021, and are comprised of Jack Kelly (Vocals, Bass Guitar), Nathan Binns (Lead Guitar, Backing Vocals), Liam Smith (Vocals, Rhythm Guitar), and Corbin Jenkins (Drums). A succession of singles has seen the quartet drum up support from BBC Radio Introducing, Hard Rock Hell, and Amazing Radio, as well as raking in listeners from around the globe aided by a budding Spotify and Apple Music presence. As well as garnering solid radio and critical acclaim for their work, the Brit riff rockers have also amassed a growing following which has been spurred on by their rampant gigging throughout the north.

Adding their already impressive release output, KULPA surge onwards with another monster single, Bloodshot, which is a heady slab of groove-induced riff rock set against a stabby anthemic refrain. The band remark about the single: “‘Bloodshot’ encapsulates what we are all about: punchy choruses, head-banging breakdowns, and synthy elements.”

The diligent crew are now braced for nationwide recognition as they plan to play a glut of shows for the remainder of this year and beyond. This is a band that are certain to break out to a national audience; latch onto them now before they take flight.