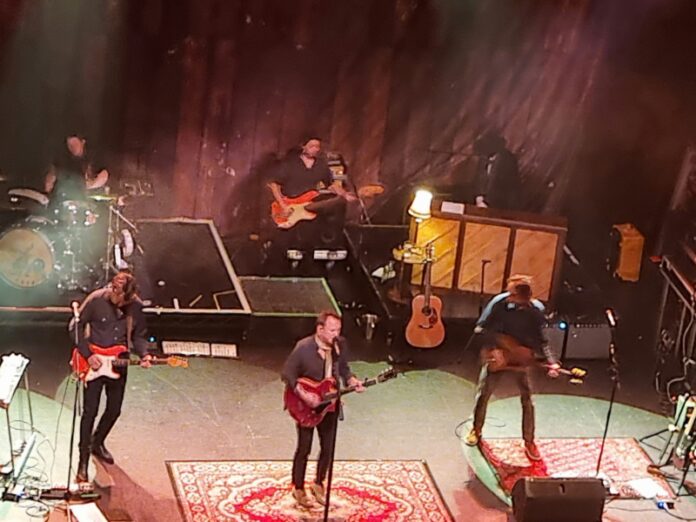 From England’s North West, but with a heart – and a sound –  that belongs to middle America, Knutsford’s Fine Lines have clearly set themselves a challenge to win audiences over when on this full UK run. It’s easy, actually, when your music is as laid back and warm as “Kings Of The Three Street”. Their approach of having two singers in David Boardman and Zoe Blythe, works a treat, especially when Blythe takes the lead on “Del Rio”. “Forget About You”  – a single from their current record – takes things down a more folk path with the fiddle of Emily Doggett to the fore. This, though, is a myriad of styles, as “Begging You” proves. Drummer Mark Radcliffe (probably more famous for the other thing he does rather than co-writing these tunes) delivers a cowbell drenched rhythm that has echoes of the Stones, and indeed by the time their set ends with the playful “Meet Me At Kiki’s” they are confident enough to engage the packed crowd in some clapping. It’s met enthusiastically too, and it’s a recipe that’s pretty easy to fathom. Outside its cold and wet, in here, when Fine Lines are playing, it’s as sunny as July. And there’s nothing wrong with that. A quite lovely half an hour.

Towards the end of his set, Kiefer Sutherland introduces the song “So Full Of Love”. A track from his “Bloor Street” record. Released earlier this year, it’s a happy tune that he claims to have written in the shower. He also reasons that the songs on “….Street” are happier than usual because, although they were written in the pandemic, the pause made him realise how grateful he was for the life he gets to lead.

And oddly, in that moment, the context for the whole show seems to fall into place. You look at Sutherland, from the second he walks on stage with “Ole Lonely Life”, to the second he walks off it, some hour and twenty minutes later after the Latin flavour of “Agave”, the smile never leaves his face. Ok, the fella can act, but he’s not here. This is a dream. His dream.

How he gets to live it, basically, is by being able to write some very reasonable blue collar songs, like “Chasing The Rain” (aptly about the joy of being on the road), somewhere in between Springsteen and Tom Petty, but crucially being backed by a truly brilliant band to bring them to life.

Being joined by Marc Ford of the Black Crowes perhaps underlines that better than anything, and it means that stuff like “Going Home” or the ballad “Reckless And Me” – the title track of his 2019 record – are as well done as anything of this type of will be, anywhere.

“Two Stepping In Time” has even more of a Bryan Adams vibe, but the cover of Patty Lovelace’s “Blame It On Your Heart” is fun and the piano frolics. There’s a depth to these, too. “Bloor Street”, the song, comes from the heart, and “County Jail Gates”, a highlight on the record, is here as well.

There’s another couple of covers, “Ways To Be Wicked” (by Tom Petty amongst others) and a rocking version of Petty’s “Honey Bee”, but in-between, “That’s How It’s Done” is a homage to the bars of the world (“I decided I wanted to spend my life in them and I have had a pretty good run at it ….” He smiles) and “Down In A Hole”, the first thing he put out, allows Jess Calcaterra on drums, her moment in the spotlight, but also highlights once and for all that this is not a vanity project, this is a rock n roll band as good as any other.

When they return for the encore, Sutherland is minus his guitar, and fronting the band, he’s energetic, and he’s excellent on “Friday Night”, before the aforementioned “Agave” is one last smile on a night full of them.

The best thing about it was, although The Institute was packed, and the show was rapturously received, no one enjoyed it more than Kiefer Sutherland himself. “I’ve been counting down”, he’d said: “and it’s been two years seven months and 15 days that I’ve been waiting to play for you”. It was worth it, for everyone.