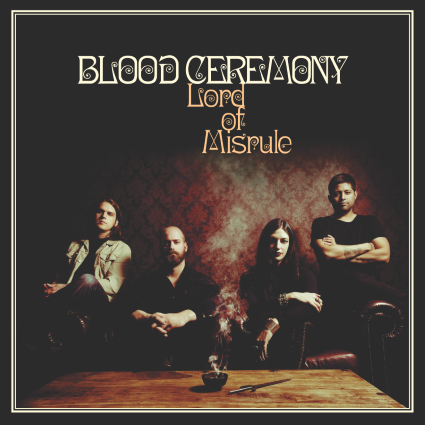 The first of two different perspectives on the new Blood Ceremony. This one is Damian’s view. Tomorrow afternoon, Bernard

Blood Ceremony is a Canadian band formed in Toronto, Ontario.

“The Devil’s Widow” kicks off this nine track offering very much in the vein of the wonderful Jethro Tull with Alia`s flute leading us in. An impressive slice of folk prog metal where the vocals reminded me of Grace Slick at times. I really loved the flute interlude.

The next track “Loreley” has a more sixties feel to it. A wonderfully upbeat melody that wouldn’t be out of place with releases from The Move or Love.

“The Rogue’s Lot” is more of a straight forward trip in the style of Deep Purple but with a flute interlude thrown in for good measure, ending with an excellent organ refrain.

The title track “Lord of Misrule” is a brilliant melodic fest. A great pacey tune highlighting the musical strengths of the individuals in this troupe. Hours later, I found myself humming some of the lyrics, such as “In the night we exist, we make merry and get pissed. It’s four o’clock and getting on for dark, there’s a feast of fools in the back of beyond”

Apparently, The Lord of Misrule – known in Scotland as the Abbot of Unreason and in France as the Prince des Sots was an officer appointed by lot at Christmas to preside over the Feast of Fools. The Lord of Misrule was generally a peasant or sub-deacon appointed to be in charge of Christmas revelries, which often included drunkenness and wild partying, in the pagan tradition of Saturnalia. At the end of the month’s festivities, The Lord of Misrule’s throat was cut as a sacrifice to Saturn. I must admit this is a band that gives us a history lesson.

“Half Moon Street” has almost a reggae feel about it at times but still what I’d term folky prog rock. If somebody had told me this was Focus I wouldn’t have been surprised.

A change of tempo gives us “The Weird of Finistere” an almost eerie lullaby come ballad, giving us time to catch our breath and relax.

“Flower Phantoms” has a sixties beat to it, at times it’s as close to a Northern Soul tune that Blood Ceremony come to.

A real psychedelic number is up next in the guise of “Old Fires”. Swirling organ, thumping bass, pounding drums, great guitar licks and marvellous vocals all come together in this offering.

The final piece in this eclectic jigsaw is “Things Present, Things Past” a superb acoustic track to round things off. A wonderfully melodic tune accompanied by some thoughtful lyrics.

Well I really loved this album. The influences were so diverse, psychedelic interludes / Metal / Folk / Progressive Rock and lyrics on the subjects of Obsession, Love and Death. No wonder this group is being hailed as “Toronto’s most original band”

I found this release really breathtaking at times.

Previous article
Into Port
Next article
REVIEW: SCOTT SORRY – When We Were Kings (2016)