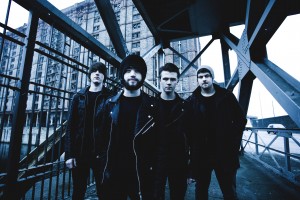 A cursory click on the foundation of internet knowledge Wikipedia would show a host of meanings and links when you type in the words ‘Black Diamond’.

You get minerals, animals, trains, towns in America, the Kiss song and an Aussie Rules Football League to name but a few. What’s missing when you search for name is the fact that Black Diamond is also the name of a stunning young rock band from Liverpool. A place with some fairly remarkable rock history, I’m sure there were four mop top blokes from the city in the 1960’s who did ok but I’m damned if I can remember what they were called!!

Perhaps the fact they are just releasing their debut EP might be a valid reason why they are not yet listed amongst the Kiss classic. On hearing the quality of the said EP it surely won’t be long before their own Wiki page is created.

“Strangehold” is the full-throttle opener. Not a cover of the Ted Nugent track, in case you were wondering, although there are some similarities in its brooding rock intensity and wall-shaking bravado. Similarly “Cocky”, as the title would suggest, is stomping and swaggering trip with enough hooks to catch Jaws.

Although the band are young in years, with an average age of 17, they are classic rock/metal in spirit. The band enlisted the production skills of Paul Tipler (IDLEWILD, PLACEBO) to help them achieve the bombastic and groove-laden sound of this EP. A grizzled veteran band with 20 years in the business and still firing on all cylinders would be proud of this.

“Down In Flames” rises like a Houses of Parliament-sized bonfire on the 5th November following the languid outback opening. “Elena” adds a touch of funk to proceedings giving the band a foot-stomping appeal and vocal refrains that are carried by all the genre’s big hitters.

The fact that these guys are new on the scene just means that their ‘Greatest Hits’ have yet to be written, although the first four could have been said to exist on this EP. Dan Byrne’s vocals have all the quality and depth of a guy who’s been singing his hard-edged rock n roll guts out for three decades or more. There are tales to be told in them vocals chords.

Forget protestations of the death of rock music. Taken a listen to Black Diamond, don your patched sleeveless denim and get down to your local venue and support bands like this. With an album in the pipeline alongside a national tour it’s time for these rockin’ & rolling stones to start gathering some momentum. They have the guts, now for the glory.

Check them out at: