Featured Band: Palace Of The King 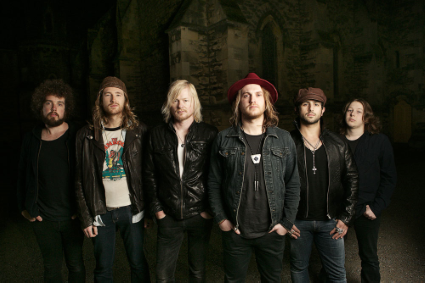 Their new album’s out in June, and Airbourne love them. Get on board with Place Of The King

Many doomsayers are writing rock’s obituary in 2015. But if you think rock is dead, just check out Palace Of The King. Steeped in bluesy swagger and riff-heavy psychedelia, this is rock and roll that leaves a trail of denim-clad soldiers and converted non-believers in its wake.

Formed in late 2012, Palace Of The King – nameless at that point – quickly recorded a 3 track demo and developed the vision of a 6-piece blues-infused rock and roll band.

Far from a grave-robbing retro trip, Palace Of The King has just as much in common with Rival Sons, Graveyard & Jack White as they do Led Zeppelin, Black Sabbath & Deep Purple.

Remember when bands released an album a year and toured ’til the wheels fell off the tour van? Having spent their formative years storming stages in every corner of Australia – alongside bands as varied as Airbourne and The Tea Party – and priming themselves for an international assault, the time has come for Palace Of The King to take their brand of rock n’ roll abroad.

Armed with 2 EPs, a full-length vinyl LP and now a debut album proper, this is a band that has earned their stripes and wear them with pride. “Palace Of The King is literally like a huge ground shaking Palace of RIFFS, SOUL and Rock’n’Roll.” comments Joel O’Keeffe, lead singer and guitarist of Airbourne. “With more hooks and lines than a hard working Bering Sea fishing fleet they are guaranteed to tangle you up, reel you in and blow you away with their unique six-stringing, soul singing, sexy stomping Rock’n’Roll! They are the real fuckin’ deal and I can’t wait to see them setting fire to Europe soon! Crank up POTK!”

In 2015, it’s time for the White Bird to take flight. From three minute funk-infused rockers through to seven minute Sabbath-esque crushers, Palace Of The King has seized the opportunity to explore every intricate corner of their influences and craft a debut album that captures a band at a point where ‘scratching the surface’ isn’t nearly enough. Standby for an album that tears apart the 100- year history of the blues, adds a distinctly modern edge and smothers a ‘no holds barred’ attitude across 44 minutes worth of riff-a-minute, hook-laden rock and roll. The ‘freight train’ metaphor may be overused and stale.

But you’d be hard-pressed to find one that is better-suited to a band that has played over 200 shows and released a mountain of music at such a prolific rate, all within two years of striking their first chord as a band. Turn it on, turn it up and strap yourself in for the ride. White Bird/Burn The Sky is about to launch stratospheric.

Palace Of The King are: