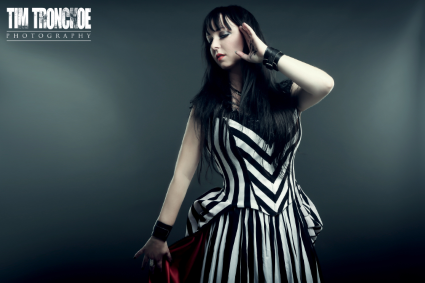 The story of Dark Sarah begins…

Dark Sarah is a new music project by Finnish metal band Amberian Dawn´s former vocalist Heidi Parviainen. She is a professional classical singer and experienced performer. During the years with Amberian Dawn, she released four studio albums and did several European tours. After parting ways with Amberian Dawn in late 2012, she started to build up her solo career. Dark Sarah became the name of her project, along the first lyrics she wrote on the album. This first song called “Save Me” introduces the listener to the main character Sarah, a young woman left at the altar by her husband. When she is on the verge of breaking down, something wakes up inside of her and she changes into another person; her meaner half, Dark Sarah.

“I used to look at the world with blue eyes. I used to love with an open heart, but I was naïve. The world needed to show that to me. I got angry for my weakness and angry with the world. In the darkest swirls of my mind I got stronger and meaner and started to change. I worked with my fear and I became DARK SARAH. I´m not bitter; I´m just bitter sweet.”
– Dark Sarah-

The debut album called “Behind the Black Veil” leads you through the psychological adventure of Sarah, who is hovering between her two personalities.  Dark Sarah´s music combines metal, film music and theatrical elements. Sarah´s thoughts are at best depicted in the dialogues (duets) with the guests – “The Fate”: Manuela Kraller (ex Xandria), “The Queen of No Good”: Inga Scharf (Van Canto) and “The Moon”: Tony Kakko (Sonata Arctica).

The album was funded through crowd funding on IndieGoGo in three parts – Three Episodes- and they all reached full funding.

Dark Sarah has also released as many as four music videos for the “Behind The Black Veil” album and the fourth and latest video was filmed in wintery Finland in February for the duet “Light in You” with Tony Kakko. It will be released in April 2015.