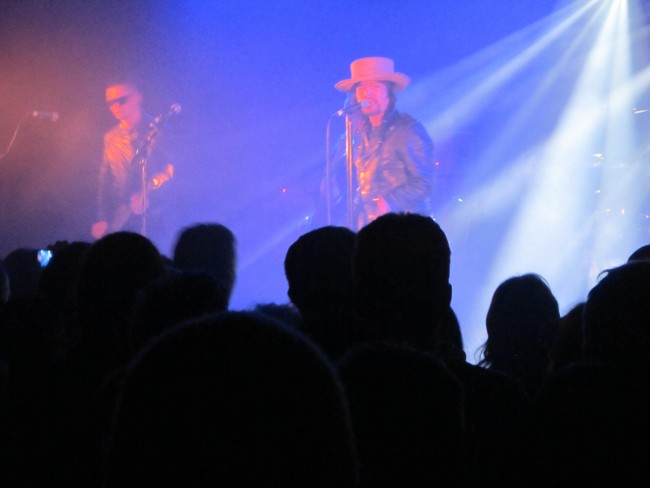 Anyone who questions our diversity here at MVM should read this review’s opening line. Damian meets his Prince Charming

I must admit I have always liked Adam Ant. I’ve seen him a couple of times but really loved his debut album “Dirk Wears White Sox”, released in 1979 before he donned an Highwayman’s outfit and became mainstream.

A healthy crowd awaits the show as I reach the renamed Copper Rooms, formally the Warwick University Students Union.

Soon enough Shooze arrive on stage. A Rock / Ska / Reggae band from Redditch, they were very energetic and seemed to win the audience over straight away. Songs like “London Town”, “Rolling On The Wrong Side”, ““Leave me”  were great. The band seem like a young version of the Ruts.

So, onto the main event. With no intro, the main man steps out and we’re into my favourite track “Car Trouble parts 1 & 2”. It could all have gone downhill from here on, but this is Adam Ant we’re talking about.

“A collection of brilliant songs follow, including  the wonderful “Never Trust A Man (With Egg On His Face).”

Mr Goddard (as it says on his birth certificate) looks fit and healthy and seems to be relishing the material he’s performing.

Why not? With songs such as “Plastic Surgery”, “Beat My guest”, “Christian D`or” and “Whip in My Valise” all following.

During this last section of songs, a heckler gets short shrift. He may not be the biggest guy in the world but he certainly packs a punch. Don’t take him on, unless you are prepared for a response….

This seemed to fire him on for the remainder of the set which included “Deutscher Girls”, “Lady”, and a superb version of T Rex`s “Get in On” to close the set. We had a fire alarm through one of the later numbers and he just carried on like a real trooper.

As he returns for the encore, our host explains that his next task is to remaster the “Kings of the Wild frontier” album and release it on a double gold vinyl edition.

He imparts that the single is his favourite track and launches into it. The superb “Fall in” follows before “Physical (You’re So)” ends a terrific gig as Adam leaves the stage with a little more pomp than he entered with. Adam Ant is one of our Punk National treasures and should be feted as such. Adam we salute you .