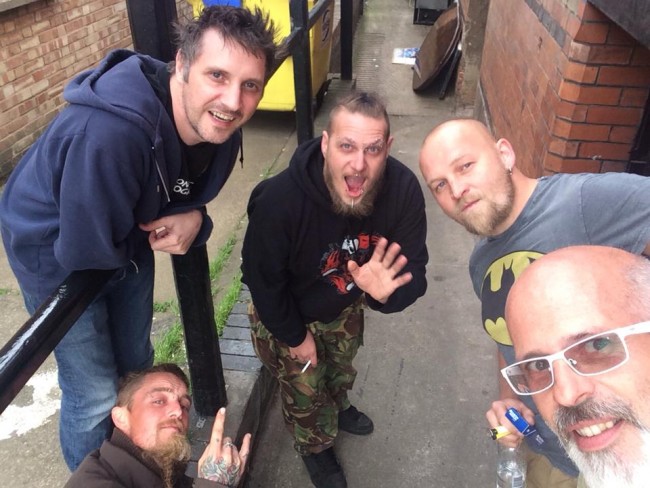 The fella photobombing his own band’s photo on the bottom right right is called Simon Yarwood. He’s just spent the last nine weeks judging Metal To The Masses with MVM’s Andy. He’s a top man. When Andy isn’t boring him by talking about The Almighty, Clutch, Iron Maiden, Orange Goblin, The Wildhearts and Thin Lizzy, Simon is the guitarist in a rather spiffing – and new look – band. Read on.

After a fantastic couple of years where Resin went from strength to strength highlights of which include outstanding reviews for their debut album, a debut music video and no less than three performances at Bloodstock Festival both acoustic and electric , pointed out as highlights of the weekend by both media and general public it was a sad day when both Dave(bass) and James(vocals) decided, for different and valid reasons, to end their time with the band after 5 and 8 years respectively . This along with losing yet another drummer mid year left the two remaining and longest serving members (Chez and Sime) with a massive decision to make…

So after a full house at the farewell gig in Leicester it was decided to get on with a rebuild no easy feat for a pretty established band with a distinctive sound but being the main songwriters and the two that started out together it was always going to be the final outcome!

The band would like to welcome aboard old friends and new members to continue the journey , they are :Dave Gandon (vocals) and Stu Reynolds (drums) these two guys have been working together for years as part of Twisted Species have played Rock and Metal Circus, Les-Fest (Scotland) and most recently opening up for Slash at the LG Arena Forum in Birmingham.

Drask (yes he only has one name) (bass / vocals ) Former member of EnemoJ and well known on the metal circuit and guru in all things paintball. Currently writing new material with a single and video scheduled for a summer release Resin are looking forward to getting back out on the road to showcase the new sound, it’s a bit dirtier and a bit bluesier but it is still 100% Resin with their trademark mix of Grunge and Metal.

See the return at the sold out Breaking Bands Festival !

And you can hear their new single here: And it takes over from where the awesome Sacred Mother Tongue left off in our book.  www.resinband.comresinonline@hotmail.co.ukwww.facebook.com/resinonline