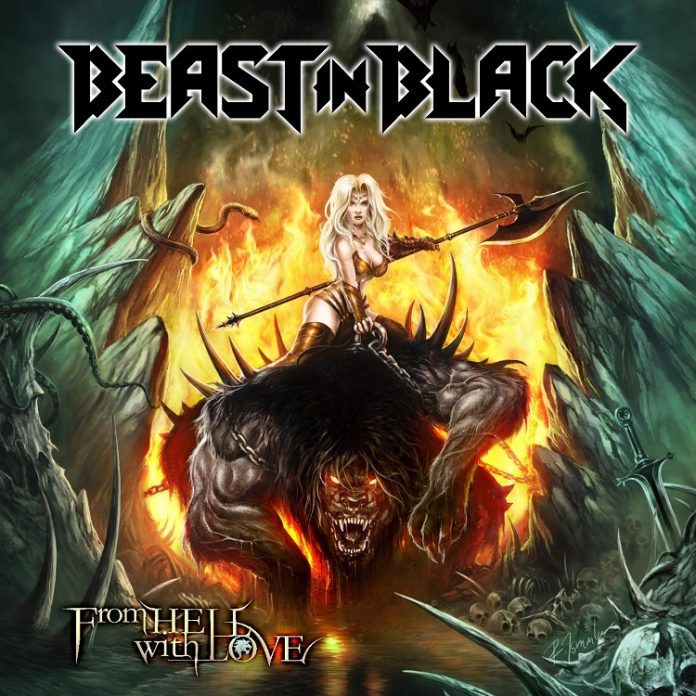 Possibly the most metal name out there, isn’t it? And yet, this really isn’t one of those bands that screams and growls. In fact, you’d be tempted to say they were one of those metal bands that people who don’t like heavy metal think all heavy metal sounds like.

Except they’re not that either. Not really.

“Cry Out For A Hero” has already done a riff that Dragonforce might have baulked at for being OTT, roared its verses, and had its leather clad fists proudly in the air, even before its done its chorus of “all our lives are on the line, we need a hero.” Put it this way, if the apocalypse is coming, then, brother, we’re going down in flames. And riffs.

Some explanation is needed. “From Hell With Love” is Beast In Black’s second record. They were a band formed when original Battle Beast member Anton Kabanen walked out and formed his own band – presumably, on this evidence at least, because he thought Battle Beast were a little stripped down.

That, surely, can be the only explanation for the title track, which is somewhere between Euro disco stomper and Europe’s final countdown, and the stacked harmonies on “Sweet True Lies” is like the Bee Gees gone metal.

But in amongst all this, singer Yannis Papadopoulos gives it his best Rob Halford, and you’ve never heard hooks this unapologetic in your life, you really haven’t. “Repentless” smashes glass at 25 paces and has something close to a Nightwish thing going on. That is, to be frank, if Nightwish were the house band in Big Boys Sauna Club.

“Die By The Blade” both ramps up the electro pop and manages to sound as metal as you like, while when the flute-like sounds start in “Oceandeep” then to be honest you are thinking, of course this album needed a bit of medieval folk. Then it builds to a crescendo (of course it does) and it does not, give. A. Shit.

“Unlimited Sin” is a cracker of a thing. Righteous power metal, and although there’s a song called “True Believer”, it would be unfair to say BIB were defending the same faith as Manowar, say. Indeed, this one has a line in that rather sums things up. “Let the world think whatever the hell it wants,” offers up Papadopoulos “It’s never easy to go against the grain.” And viewed like this, then BIB are true mavericks.

“This Is War” comes in on the back of a more conventional power riff. That is to say it sounds a bit like Maiden and the chorus soars, while “Heart Of Steel” decides things haven’t sounded 1980s enough yet, so has a go. Manages it too. Music hasn’t sounded like this since walkman’s were new.

It is almost a shame that it ends with its most hard rock thing. “No Surrender” offers no explanation, nor does it seek forgiveness. It rocks like Satan himself, though. Riding up the fast lane. On a Harley.  That’s the inference throughout the record, but really, it is the only conclusion after the solo here.

Put it like this, if you think pompous is a bad word when it comes to music, then look away now, because this isn’t the one for you – I mean, check the cover artwork for goodness sake. The rest of us? Well the rest of us can think its ludicrous, but brilliant. And to hell with anyone else’s opinion.

Previous article
ARTIST OF THE DAY: HE WHO CANNOT BE NAMED
Next article
DISTRAS TAKES THE BLAMED