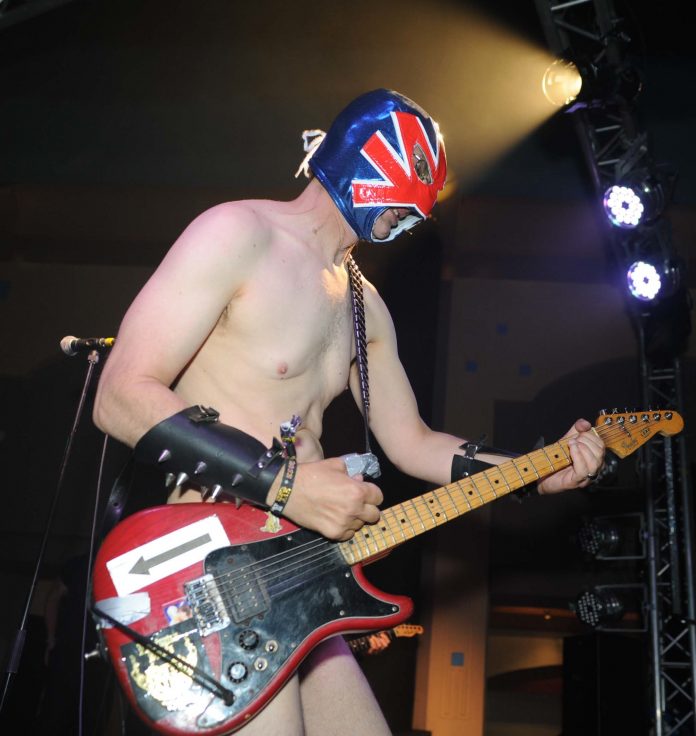 He Who Cannot Be Named has been playing punk rock for almost 30 years, most of that time with the legendary “Dwarves”. An original member of this San Francisco based combo, he wrote or co wrote many of your favorite tunes from the early Sub Pop albums “Blood Guts and Pussy”, and “Thank Heaven For Little Girls”. He was voted guitarist of the year by “Flipside Magazine” in 1991, but is mostly known for his unusual stage wear, or lack thereof. His trademark look can best be described as “naked and wearing a mask”. According to James Orme from Slug Magazine, He Who… is “maybe the most mysterious character in all of rock n’ roll.”

Perhaps his infamous “death hoax” has something to do with this air of mystery. “Sputnik Music” published an account of this macabre bit of rock history.

In 1993 the band (Dwarves) issued a press release stating their guitarist
HeWhoCannotBeNamed had been stabbed to death in Philadelphia. Though this later turned out to be a hoax, the band even went as far as to attach a tribute to the “late” guitarist on their 1993 Sub Pop-released album “Sugarfix”.  Sub Pop did not respond well to the hoax and summarily dropped the band from its label.

Finally, in the summer of 2010, He Who Cannot Be Named released his first solo album titled “Sunday School Massacre” to rave reviews. AMP called it “one of the most important punk rock releases in recent memory”, and went on to say that it “is everything you would come to expect from the guy responsible for most of the nasty riffs that kicked your ass when you were back in high school”.

Hewho’s second album, “Humaniterrorist” was released in October 2012. This collection of songs continued where the first album left off, with Hewho’s own style of short, fast and funny punk. A music video from one of the songs on this album, “Gettin Pissed” was released around the same time. A second video for “Happy Suicide” came out the next year.

In March 2013 LOVE/HATE was released, exclusively on CD. This collection of 22 songs was primarily a repackaging of the first two albums, but contains a few previously unreleased tracks.

In August of 2013 He Who Cannot Be Named returned to the UK to rave reviews. This time he appeared twice at the “Rebellion Festival” in Blackpool. For this exclusive appearance he was reunited with UK drummer Spike Smith.

Hewho’s fourth album, “The Good, The Bad, and The Brutal” is available online now on all major digital outlets (iTunes, Spotify, Bandcamp etc). It will be available on extremely limited purple vinyl in the US (100 copies total). As well as a limited edition color for Europe and Canada. Keith Mueller again appears on lead guitar with the addition of drummer Eric Borst and bassist Bobby Ramone. This album is a collection of songs, half with the word “Good” in the title and half with the word “Bad”. It also features guest vocal appearances by Spike Slawson (Me First and the Gimme Gimmes), Chris Barrows (Pink Lincolns) Sean Wheeler (Throw Rag) and Nick Oliveri (Dwarves, Mondo Generator, Queens of the Stone Age). This album will come out on Spaghetty Town Records (USA) , God’s Candy Records (Canada) and Beluga Records (Europe).

HeWho will be touring Europe with a full band in November 2018!