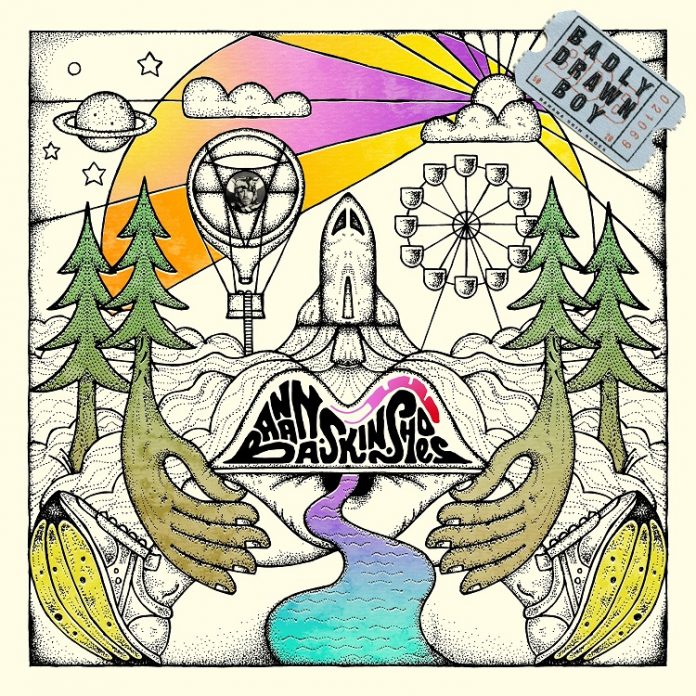 I’m like everyone else, I suppose. I bought “The Hour Of The Bewilderbeast” in the early 2000s, after it won whatever award it won (I think it was a Mercury Prize, but that would involve research). I’ll bet I am the only one who bought it in a rain delay of an Ashes Test Match in Leeds, mind you – but I digress.

Or do I? Because to me Damon Gough – Badly Drawn Boy to his mates – is always about that 2000 era. I was bored with Rock, at the time. All my favourites had gone into hiatus or worse, thought they were grunge bands. They’d been replaced by Nu-Metal and Pop Punk, and frankly, I was the target market for neither.

When I was in that record shop with my mate at Headlingley in the rain, I hadn’t actually heard a BDB song. I knew he’d won the award (and of course I know it was the Mercury, I also know he beat Doves into second place, but I’ve got an image to keep up….) but I also knew that Springsteen was his hero.

That was enough. But on the way home, we listened to the record, me and my mate, and we found he was nothing like The Boss. At first. Then the subtle things, like the fact he was as imbued in Manchester as Bruce is in New Jersey, the characters, the wonderful use of language that means the songs sort of mean what you want them to, its all here.

It still is, too, on this evidence.

“Banana Skin Shoes” the opening track here as well as the title track does that funky, almost hip-hop thing that Beck (another one of my early 2000s diversions) did on “Mutations”, white boy soul, but its catchy as hell, and the fact that he follows this with “Is This A Dream”, another with a dance beat, sort of explains the vibe. This one is overtly political (well, in my head it is, anyway, but then most things are these days!) but as he puts it “take a snapshot of what’s going on in this world, it’ll only get you down….” Its almost as if the music is the antidote.

The fabulous “I’m not Sure What It Is” deals with confusion, “I can see the destination, but not where to begin” he sings here, but as the horns wash, the hook line: “the best part is that the future is unknown” offers hope. And it acts as a neat line for the seemingly blank canvas of this collection too.

“I Just Wanna Wish You Happiness” slows things down, and offers: “I don’t remember falling out of love, but the bolt’s undone,” as its pay off.

The absolute best thing here, though, is “Tony Wilson Said”. A uplifting love letter to Manchester, and even is a bitter Brummie who thinks we should get more recognition for our contribution (we’ll see your Happy Mondays and raise you Black Sabbath and Judas Priest) you can’t fail to be swept along with the sheer joy of this.

“….Shoes” goes to some odd places for its exploration. “You And Me Against The World” recalls the Wannadies to me and its difficult not to hear The Beatles in the stings of “I Need Someone To Trust” if not the rest of it. And the odd instrumentation that was always a trademark of Gough’s is all over “Note To Self”. Most would do it straight acoustic,it has a drum machine shuffle, here.

“Colours” does a Biffy Clyro harmony, but only if they were in a club in the early 90s, while the piano of “Funny Time Of The Year” makes that one like an updated Elvis Costello, in a way, and if a lot of these have sounded like they had their roots in what might have been BDB’s parents record collection, then the 70s disco vibes of “Fly On The Wall” and “Never Change” make it absolutely clear where the mind is at.

There is a gorgeous, laid back summer like quality to “Appletree Boulevard” and that is again prevalent on “I’ll Do My Best”. On what feels like a particularly personal one, it seems like he’s reminding himself (or maybe telling Mrs. Gough?!) “The cold day in springtime, when you took my name, its down to me to prove, it wasn’t all in vain.”

It’s not, not if this is anything to go by. “Banana Skin Shoes” takes very few miss-steps, in fairness. Very few. It’s more than just a welcome return, it is a bold, brave and inclusive work. Badly Drawn Boy’s best for a long, long time.