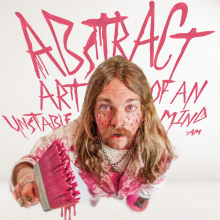 Take Austin Meade. He’s emerged from Texas with this sprawling piece of brilliance. Officially it’s 19 tracks, but four of them centre on a day in the life of LMAM, a fictitious radio station that acts as the anchor for the “Abstract Art Of An Unstable Mind”. Not only does this get “reminds me of Frasier” bonus points, but it gives it a kind of concept.

Which is fine, except concept records (however loose the thread) only work if, you know, the songs are any good. Meade’s are superb.

They are as hard to pin down as the man himself mind you. “Violation Delight” comes in with a kind of Tyler Bryant and the Shakedown crunchiness, but don’t think for one minute that you’ve got the boy sorted. He’ll outflank you. Not least because his lyrics are brilliant. “It feels so good to fuck you over” shouldn’t be a hook. It is here. Then there’s the thought that he couldn’t give a monkey’s toss about your preconceptions. “Red Roof Estates” has a soul, is sort of funky and deals with what we must assume is an affair by suggesting “I have a wife back at home, the one who’s number I am ignoring on my phone.” Oh and all of this is topped off with a screeching guitar solo.

This album seems to have sex on its mind throughout. The fabulously cutting “Sinner Of The City” possesses perhaps the line of the month with: “You were the girl of my dreams, until I woke up.” And if you’ve been there, Meade is your new spokesman. Likewise “Late Night Letdown” is a 70s style romp that introduces us to “Spicy Stacy” and its companion piece “Queen Of The Letdown” seems to have caught our boy in his room enjoying some “personal” time. And he tries to have a threesome with two sisters, before noting: “I understand if you don’t wanna stick around”. Now, look I know some odd women, but……

We’ve had some fun with the words (because its easy) but lets not forget that this is a proper rock n roll record. A compelling one at that. Somewhere between The Sheepdogs and a garage band, “Rosè Romance” is a prime example of how this album just somehow worms its way into your conscious, and “Varsity Type” is as 90s as you can get.

“Loser Mentality” even asks to be returned to the 90s as though nothing has ever changed. Indeed, the last few (the ones that aren’t interspersed with the “radio” stuff, seem even more reflective. “Take A Trip” muses on a girl that he used to know and asks plaintively: “does your husband still love you” and if you’ve been there …(well you get the picture….).

“Dial Tone” has more than a hint of The Replacements about it, and there’s a gentle beauty in the de facto title cut, a fragility, and there’s a type of effortless grandiosity about “Quicksand”. It’s noticeable that the poetic ones towards the end tone down the rock. Sort of. “Darker Shade Of Blue” even starts off like a pop song, before going all quasi power metal. “Forever Unfaithful” returns to more familiar ground, mind you, before “Rain Dancing” the longest one on the album (a whopping four minutes) if you please! Sees the credits roll over some quirky acoustics before it explodes.

And “quirky” is a word I hate, but sort of applies here. I’d never heard of Austin Meade before this arrived to be truthful, but its clear that he could have been and could still be, anything he damn well wants to. I was having a look at some background on him and came across an interview in 2019 in the Texas Herald where he dismissed those who want instant success by saying: “Maybe their grandmother told them they were talented….” That shows an artist who wants to grow. And although you couldn’t call “Abstract Art Of An Unstable Mind” the most immediate record of 2022, you can say that if you invest time in it, then it absolutely is one of the more interesting and intriguing.