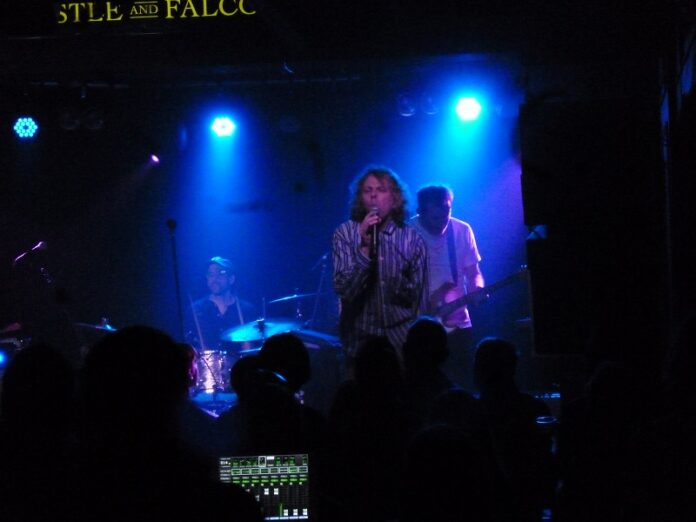 Baba Ali or Babatunde Teemituoyo Doherty is a Fort Lee, New Jersey born but London based singer songwriter whose debut album `Memory Drive` was released last year and has been tipped as one to watch by The Guardian. He was joined tonight by Nic Balchin who provided guitar riffs as Baba sings and plays synth keys. This short but well received set included songs such as the hypnotic `House`. infectious `Living it Up` where Chk Chk Chk singer Nic Offer joined the guys and closed out with the quite mesmerising `Black Wagon`. This electronic dance artist certainly had this packed audience up on their feet and was a perfect appetiser for what was to follow.

Chk Chk Chk are a dance punk, alternative dance come disco rock outfit who formed in California but are now based out of New York. Their ninth studio album `Let It Be Blue` was released earlier this year and the band are on a fourteen date trek around the UK to promote it.

The opening bars to the captivating `This Is Pop 2` ring out before we realise that most of the band have hit the stage and are blasting out this rhythmically addictive tune. There`s no let up as the pounding beat of ` A Little Bit (More)` thunders from the speakers and singer Meah Pace joins the fellas on stage. `Panama Canal` is a pretty mesmerising listen as Meah and Nic trade almost stuttering vocals.

We have a real mix match of sounds with `All The Way` which is followed by `Dancing Is The Best Revenge` where the rhythm section of Mario Andreoni on guitar, Rafael Cohen on bass and Dan Gorman on drums really get to display their talents. We have a slightly slower pace which suits `Here`s What I Need To Know` which is a much more introspective offering which refers to a friendship that has sadly fallen by the wayside.

The band share an almost unrecognisable cover of R.E.M.`s `Man On The Moon` before Rafael steps forward to sing the male Spanish language parts of the entrancing `Un Puente`

The set winds down with the wonderful `One Girl / One Boy` before closing out with what i`m sure was ` NRGQ`.

The band return and play ` Walk It Off` which must have lasted for around ten minutes before the band said their goodbyes and we all head home. How can you describe Chk Chk Chk ? a kind of mix of energetic dance like contagious high energy disco music that if i`m honest made me feel physically exhausted just watching them. The music is utterly engrossing and I was drawn to their sound as a moth to a flame. They have a few dates left before they return home so if you don`t want to miss out, now’s the time to act.