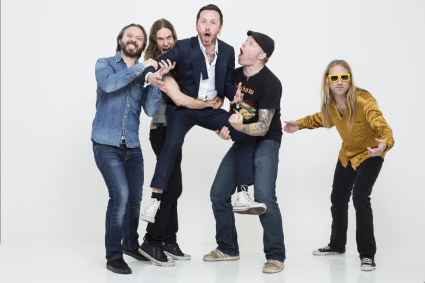 There is a moment on “Pure Heavy” where it all makes sense. That is to say, everything Audrey Horne have tried to do since a few blokes that used to be in death metal bands started a side project with a couple of their mates a decade or so ago, comes to fruition.

The song in question, “Tales From The Crypt” is a glammed up stomper of a thing, which namechecks, amongst others, “Mr. Sixx back in 1986” and it seems like a definitive statement.

The point being that what started as a studio band is now very much a live one. These tracks were recorded with the band altogether in the studio and that atmosphere – and evident enjoyment – fairly crackles out of the speakers.

“Pure Heavy,” is a record that has no frills whatsoever, instead it gets in your face from the off and stays there. Opening track “Wolf In My Heart” is a jaunty opener that rumbles along with a Who type feel, “round and around we go” chirrups singer Toschie, “same sides different show,” with all the enthusiasm of a man that’s discovered his childhood record collection in his loft and has spent weeks trawling through it.

Sonically it essentially picks up from where last year’s “Youngblood” left off. The influence of bands like Maiden, Priest and Dio is all over it of course, but also that mid-1980s sound. “Into The Wild” takes Motley Crue’s “Looks That Kill,” riff and runs with it all over town smashing the place up on its way, and “Out Of The City” possesses a simply enormous hook and chorus that won’t leave.

The pace is unrelenting – bar “Diamond,” a gorgeous little acoustic interlude for 90 seconds. Elsewhere, it’s 45 minutes of pace, indeed you almost wonder if the album is that length to again hark back to the past, given that it would have fitted on to one side of a cassette like the best ones used to.

Things close with the galloping “Boy Wonder,” which wraps it’s sheen around some acerbic lyrics that seemingly attack the throwaway times we live in, dismissing the songs hero as “the crown prince of indie culture,” before one of the best twin guitar solos you could wish for.

“Pure Heavy” as a whole is the joyful explosion of sound, but moreover it is the work of a band that is now totally confident in who they are and what they want to be. It is probably the best retro fun you will hear all year. Appropriately for an outfit named after a character in “Twin Peaks,” this is a real high point.