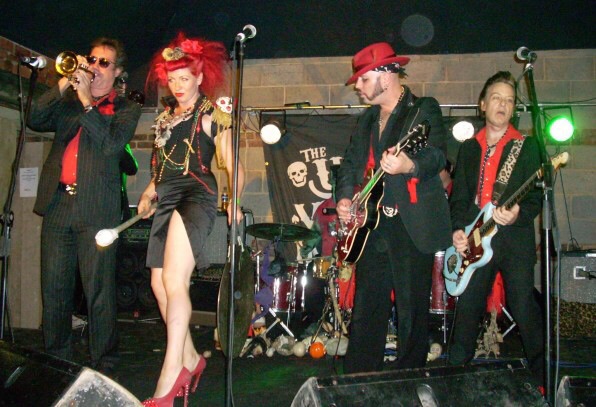 On an evening that defied convention so many times it seems entirely right to begin this review at the end. Y’see about 11pm Urban Voodoo Machine finished the last notes of “Love Song 666” which talks with great affection about sleeping (and dear reader, I have cleaned that up) with your sister, trying it on with your mother and kicking your brothers face in if he complains. Things are never straightforward with UVM.

Around 20 minutes before this, during “Help Me Jesus” tour-de-force frontman Paul-Ronny Angel had been helpfully waving around a frankly enormous sex toy, seemingly just because he can, while giving it the full Fire and Brimstone preacher act, on his knees pleading for forgiveness. Ladies and gentlemen, this is not the normal rock show.

And yet it had started so conventionally. Local band Brothers Of Caedmon are a new name to us at MV. The Redditch based four piece are best described as folky rock music and are a pretty interesting proposition. “Runaway Train” has a sort of jaunty Levellers type feel, while “Angel,” which is a newer song, is a lush sounding ballad, with a huge chorus. The band battle a sketchy sound that sees the bass too high in the mix, but their talent is evident for all to see.

Another local band Captain Jeffrey are next and the part dirty blues, part dirty funk band are great fun. Singer/guitarist Liam Hall has a really earthy quality to his vocals, but where the band really score is the inclusion of Hannah Wolstencroft who adds her sax liberally, giving things a real New Orleans type twist. Elsewhere it’s full on blues with some really nice slide guitar flourishes and there is plenty here to enjoy from a band that clearly has many disparate influences, but who cleverly weaves them into a coherent sound. Their debut album “Maiden Voyage” – out last year and from which much of tonight’s set comes – might just be worth seeking out

In case the opening two paragraphs didn’t make this totally and utterly clear, there is no band quite like London’s self-styled Bourbon Soaked, Gypsy Blues, Bop ‘n’ Strollers Urban Voodoo Machine. Right from the moment they burst on the scene a few years ago – largely thanks to the patronage of magazines like Classic Rock – they have done things on their own terms and with very much their own sound.

It’s not just the fact there’s 11 of them onstage at any one time it’s not just the antics, it’s more that there is something brilliantly left field about them – and after all, it would be a dull old world if we are all the same.

This tour is to support Britain’s best dressed band’s new “Love, Drink And Death” album which came out just a fortnight ago. Before they get to that though there is the small matter of their entrance. And anyone who thinks the art of spectacle is dead needs to go watch UVM, a quite incredible sight before they even play a note. These be-suited men and gloriously clad ladies, walk solemnly and quietly out on stage, shortly before all holy hell breaks loose.

Their unpredictability extends to their songs. How you explain their sound, who the hell knows. Part blues, part Mexican, part R and B (the good sort not the crap sort), part swing, part Jewish wedding – and even that doesn’t come close. There’s a huge brass section, there’s an accordion (which gives us a snippet of the Crossroads theme tune), two drummers, a percussionist, a fella on the big bass and ….well you get the picture.

The ….”Death” album is well represented and “Train Wreck Blues” and “Not With You” are surely destined to become favourites in the same way that “Killer Sound” – which takes on a life of its own tonight – already is.

The concert would have been better perhaps if there were either a few more people in the audience, or it was in a smaller room, but full credit to Urban Voodoo Machine for playing as though there were thousands in anyway.

The word unique is bandied about with far to great a regularity, but watch UVM and try and come up with another description. Totally and utterly out on their own.