An often tired one man Black Metal-scene gets a fresh injection from the USA. 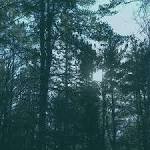 A one-man Black Metal band is nothing new. It’s as old as the genre itself. So it takes something, or someone of a unique talent to make the blackened world sit up and take notice. Nick Stanger is too young to have a background or twenty years of spit and sawdust to thrown into his music but he appears to have spent much time in immersing himself in the history of the coldest music of all. Time very well spent on the evidence of Vacant.

Although the album is called Vacant, it’s the first two tracks “Ethereal Aura Part 1” and “Ethereal Aura Part 2” that give the biggest indication of the album’s intentions and scope. At a mere 18 years of age this young Minnesotan is intent on making his mark in the Scandinavian-dominated darkness.

Whilst his tender years may not have yet provided him with the necessary experience and journey that many of his genre-defining forefathers now benefit from, what he lacks in this department he makes up for in raw emotional intensity and creatively epic landscapes. The vocals are standard for the Black Metal genre, it is a trademark after all, they twist and turn in a downward spiral of distortion and discomfort from the beginning with the occasional Paradise Lost-esque haunting quality on tracks such as “With Vacant Eyes”.

All the tracks are sufficiently alternative from each other to not make the album feel like one whole track but they also all share a common thread that makes them identifiable as being from the same creative mind. The instrumental “Lonesome” is the shortest track on the album at three and a half minutes that never breaks from its simplistic, but eerie and unsettling, theme and lays the ground for the closer “Bitter”, an 11 minute Black Metal trawl through several layers of dense and dissonant guitar tones.

At times it’s uncompromisingly harsh and in other parts it’s beautifully simplistic and evocative. There is still a long way to go before Stanger can dine with his more established peers but this is a very impressive way to introduce yourself. This is, when all said and done, one hugely talented young man’s pure and undiluted atmospheric vision of the world laid out before him in all of it’s grim glory.