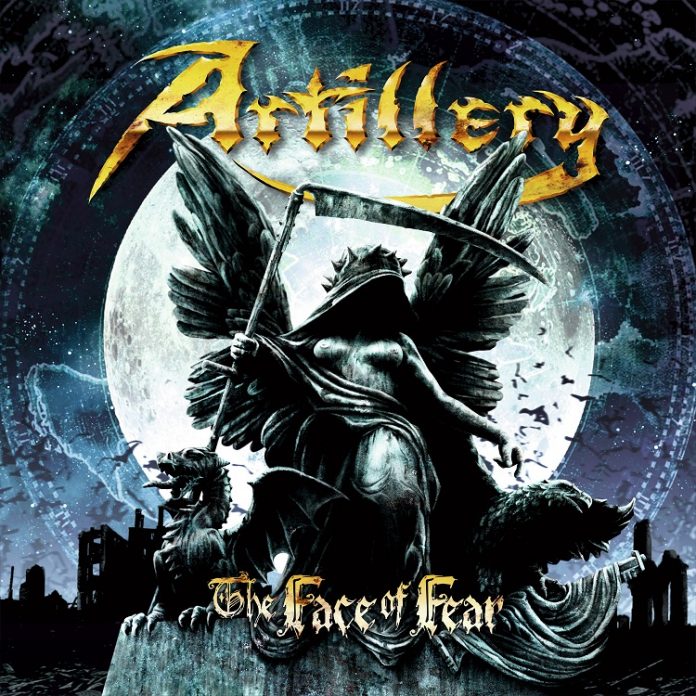 The concept of acting your age….it’s a load of old bollocks innit?

I’m 43 years old, and I dunno how I’m supposed to act. I know I still support the same football team as when I was a kid, like a lot of the same bands and my best mate when I was 10 is still my best mate now, and I am basically the same (my beard is better, and I have less hair on my head, but whatever).

So, when the press release that came with this – the eighth record from Artillery – said: “When Artillery formed in the small Copenhagen suburb of Taastrup in 1982, little did they know they’d be here alive, vibrant, and ready to destroy in 2018.” My reaction was one of, yeah that’s all very well, but they didn’t give a monkey’s about 2018 in 1982, all Michael Stützer (the bands co-founder and as far as I can tell on Wiki, their only original left) gave a shit about was making thrash metal and banging his head. As he should.

The brilliant thing is that on “The Face Of Fear”, which has emerged some 33 years after that debut, all he gives a shit about is making thrash metal and banging his head. Which means all is right in the world.

Actually, that does this gathering of Artillery’s troop’s a bit of a disservice, because they’ve mixed this heady thrash brew with a fair old dollop of Saxon-ish metal too.

All good, though, because across the nine original tracks here (there’s a couple of re-recorded oldies too) that make up “…Fear” there is much fun to be had everywhere you look.

The title track doesn’t so much as usher itself in and make itself at home as smash down the walls like a Sherman tank. And if I may be so bold as to say it, there’s a band who is playing its last shows in the UK this very week, who haven’t sounded this dangerous in a very long time.  Josua Madsen’s drums don’t thump, they crush – and that is true throughout this.

“Crossroads To Conspiracy” has the same menace as Slayer (who I may have been speaking about in the paragraph above, perhaps……) but christ, when it kicks in, then there’s no one not caught in the mosh.

“New Rage” does some acoustic stuff, before settling on a real, horns-up metal chug, as the Stützer brothers stretch themselves, while “Sworn Utopia” is a vicious takedown of the paedophile priests – one which does, though, merit special mention for singer Michael Bastholm Dahl who has done the job on the last couple of records, but never sounded better than here.

“Through The Ages Of Atrocity” features some mighty lead work, and knows its debt to the NWOBHM, but that’s just fine. Indeed, you can actually imagine Biff Byford singing this.

“Thirst For The Worst” pulls of the very neat trick of sounding epic, despite clocking in at around four minutes. There’s a cinematic quality about “Pain” – which, as it is hard rock, passes as a ballad here. It isn’t much of a stretch to think of this as a Vandenberg’s Moonkings track, say.

As if to balance that out then “Preaching to The Converted” – the sound of nihilism that ends this – is as violent as “The Face Of Fear” gets and in ending it in this way, like everything else here, Artillery have got it bang on target.

Producer Soren Andersen (Glenn Hughes and many more) is on board here and there is a sense that they’ve pulled out all the stops. It’s worked too, because “The Face Of Fear” is sensational. The idea thrash needs new blood is on hold for a little while longer yet. The old guys: they got this.