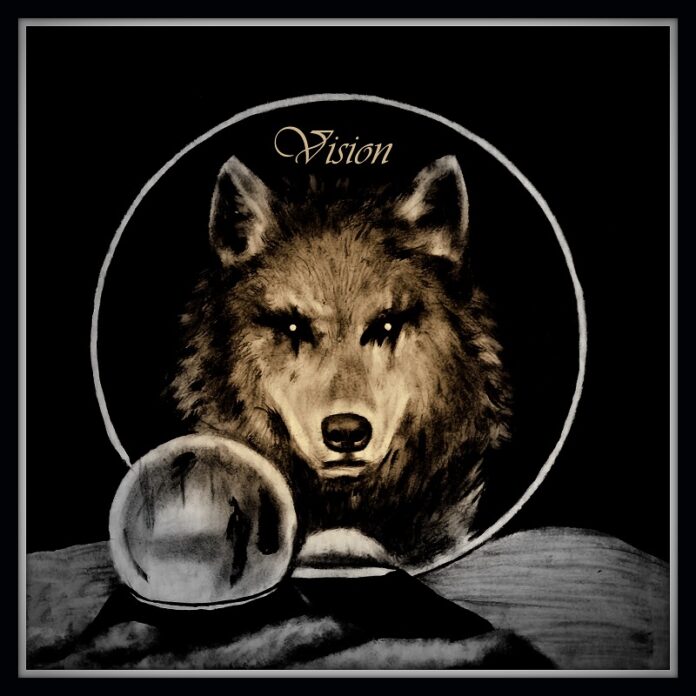 AntiMozdeBeast is the project and brainchild of Florida based industrial experimental artist Gabriel Palacio. His most recent collection of songs are issued on his latest long player `Vision` released this month.

The album opens with `Masquerade of Death` which has drum and bass fragments mixed with distant screaming or chanting and electronic beeps and bloops. At one stage it seems as if we are heading to a crescendo before erupting but the track just suddenly halts. We have a similar presentation with `Rebirth of Sin` which appears to be more drum orientated and kind of takes brief time outs as it evolves. It`s mostly spoken word sentiments that flow from anger to nigh on reasoned proclamations or thoughts.

`Portrait of Apocalypse` has a constant drum machine beat and is a slower burn with all sorts of distorted sounds and shrieked vocals sprinkled throughout. There was an almost marching texture to this piece. They was what I perceived as a call to arms texture to `Shadows Upon The earth`  which really moves at pace. I`m convinced there was even a segment that had a disco like texture on this track that is nigh on fixated with getting to the end as if challenged to do so as quickly as possible.

`Contours of Her Body` may have an anger in the intensity of the lyrics shared on this composition which ebbs and flows with controlled noise to sections of melody with distorted or off kilter synth waves sliced in. I thought `Sky Unfurled` raced along with a combination of brutal aural assaults with layered vocals screamed and spoken word almost shared in unison. It also seemed to gain some jarring percussive elements on route and some brief more melodic emotions.

`Untitled (Instrumentals)` initially sounds like a swarm of bees, then swings to a sound akin to being underwater or submerged. This is followed by a rapidly repetitively played piano before the whole process is repeated again before suddenly ending. A synth beat and distant screaming introduce us to `Maladies of The Mad` before guitar chord riffs add to the confusion. At times this number becomes fairly melodic then swerves back into intensive mayhem with electronic aural passages carved through with guitar riffs. There was almost as sense of order during the chaos.

`Sins of the Muse` had a sort of glistening quality about it and was gentler that what had been shared before and felt maybe more contemplative or introspective. It did get slightly more robust but only in it`s dying breath. We return to something somewhat more familiar with `Blood Note` with harsh vocals shared across a distorted soundscape. The last couple of minutes became even more vigorous and forceful before ending almost melodically and tuneful.

The album closes out with `ICRI` which i`m not sure as to what the abbreviation stands for if anything at all. It began quite cinematic with stark nigh on dystopian spoken word utterances.

A fairly dark and solemn listen with observances alluding to Rome and at the end GOD.

I have to admit that when I first began to listen to `Vision` I thought, nah, it`s not for me but I found that once I put my bewilderment to one side it became quite hypnotic and trace like.

It`s a really challenging listen at times but that`s maybe the charm or beauty of something quite experimental like this. I was at times drawn to it as a moth is to a flame. It does have some elements of bands such as Ministry, Revolting Cocks, and Nine Inch Nails but of a much more raw and primal intensity and passion. One to definitely file under uneasy listening.

Give it a listen and decide for yourself

Previous article
RUNNING WITH THE BEAST
Next article
ELITE COMPANY